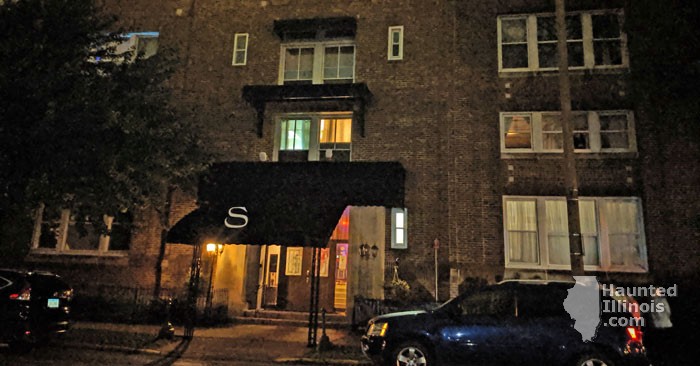 Terror at Skellington Manor is located at the corner of 18th Street and 5th Avenue in downtown Rock Island. It is a large brick building with a black awning, which has a white letter "S" displayed across the front. There are gothic lanterns by the front door, and colored lighting along the roofline.

After tickets are purchased, I was directed to walk through a parlor room, which has detailed scenes and props inside. Immediately following that brief tour, there is a large ballroom which holds the wait lines. There was a good number of actors interacting with crowds there, and there were several carnival themed booths to check out while walking by.

I caught up to a group of slow, scared kids about three minutes in, and a group a fast, scared kids caught up to me about 6 minutes in. I know there was a substantial amount of time between groups going in; this was probably just a random case of terrified teenagers moving at extraordinary speeds.

I was welcomed into the manor and directed to the foot of a large, grand staircase that went up. When it was my turn, I climbed to the top and a man in a top hat stopped me. He welcomed me to their "Theater of the Macabre" and asked me to wait for a bell. When we heard the bell, he let me into the house. I was then met by an actress in Victorian attire, who asked me my name. I gave it to her and I swear that I immediately heard a booming, ominous voice address me. Give these people your name; that was an eerie effect that I greatly appreciated.

I walked through a plethora of rooms from there; like some very impressive doll rooms, a devil worshiping room, a theater, a barber shop, a pie shop, and a mad scientist's lair. There was a hallway filled with doors on each side that had some neat effects. There were several pretty rooms that had a Victorian feel; like a parlor filled with birds and spiders in cages and a room covered in book pages and clocks.

Eventually, I walked into a large cemetery scene, and a conjoining funeral home. This area is hauntingly beautiful, and it almost looked like I was actually outdoors. This is where an actress did an amazing job scaring the kids that had previously caught up to me. She snuck up behind them and they took off running and screaming through the rest of the cemetery. They legitimately were gone within a matter of seconds. The rest of the attraction consists of more outdoor scenes, like a swamp and a forest where the trees seem to come to life.

All of the actors and actresses that I met along the way were very talented and stayed in character. Everyone's costumes and make up looked good and matched the scenes. This show has great, unique sound effects running through all of the scenes. The sets are very intricate and detailed. I loved the gothic vibe that stretches across much of the house. If you're looking for a theatrical show with hauntingly beautiful scenes and some good jump scares, I would recommend Terror at Skellington Manor.


To find out more about this event, visit:
http://skellingtonmanor.com