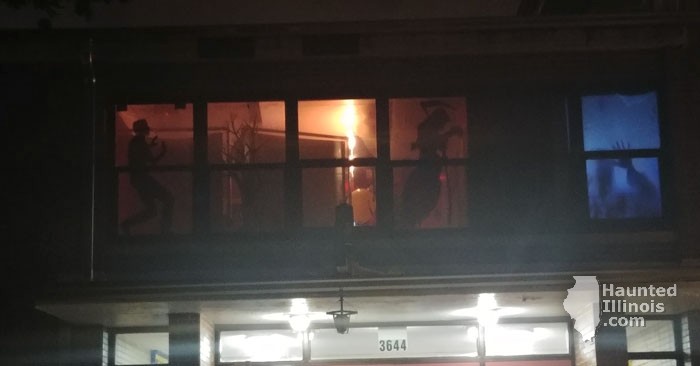 This haunt is located inside St. Viator school, and is easily found with a GPS. Also, there are large blowup figures on the corner before you turn to get to the haunt building, as well as lights, figures, and signs in front of the haunt.

There was no wait entertainment at all. Visitors simply stood in a line waiting to get into the haunt. However, there was a small selection of snacks and beverages for purchase while waiting.

Crowd control was fine, with about a five-ten minute wait between groups entering the haunt. This was to keep the groups from running into each other and it was successful when we were there. We did not encounter anyone else inside the haunt during our time through.

For a haunt that is put on by younger kids (maybe 7th-8th grade and possibly some high schoolers), Stairway to Insanity is very well done. Initially, visitors move through a room with slats on either side that was filled with hands, some real and some not, then they meet Beetlejuice and his friend Mr. Bones, who ask them to spin a wheel to see how scary the haunt will be. Of course, the game is rigged and everyone gets Extra Scary! From that point, the scares come from all around and do not let up.

Almost all of the scares are of the jump scare variety, although there are a few actors inside who play it more for laughs or for the creepiness factor. Where Stairway to Insanity excels is in the sheer amount of people inside the haunt. Literally around every corner there is a person waiting to jump out, and there are so many corners that visitors do not get a break in between. This actually enhances the jump scares as they evolve from a simple surprise to a scare followed up with a bunch of actors screaming at you from all sides. It might not sound too interesting, but it's fun and effective.

Some of the standouts included three white-faced actors (including a nun) who surrounded visitors and followed them, two creepy girls inside a room filled with green light and fog who popped up from nowhere and then quietly sang the Freddy Song ("One-two, Freddy's coming for you...") from Nightmare on Elm Street as they followed you. And Freddy himself does appear, but not immediately after the room with the creepy girls, so it throws visitors off.

Another excellent scene was a doll room with a giant live teddy bear. The bear was hilarious, whispering things to visitors about the incorrect choices they had made as they walked through the haunt. Also in this area were Pennywise and another character who misdirected visitors and then harassed them for going the wrong way. Very comical and lasting only long enough to get some laughs and not become frustrating.

Overall, the actors stayed in character, varied their scares just enough, and ad-libbed their reactions based on visitor comments, making for a fun experience overall. As these are younger kids and as the scares are mostly of the same type, some visitors might not find the haunt overly scary, and indeed it isn't, but it is "in your face" just enough so that anyone who is easily scared might find it terrifying.

The only complaint about Stairway to Insanity would be that it is short. It's a lot of fun going through the haunt and looking at the various scenes, but it's over all too soon. The ending portion requires visitors to go down a few sets of stairs to get to the exit, but there is a corridor before this part which could possibly be used to extend the haunt. Other than the length, Stairway to Insanity is worth a look, especially if you're looking for that old school feel from a haunt.

To find out more about this event, visit:
http://www.stviatorchicago.org/