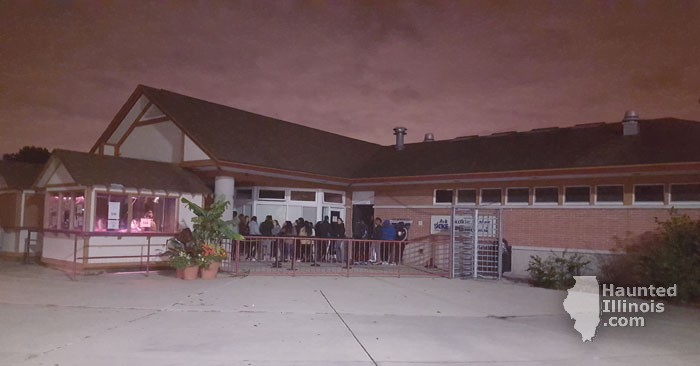 Scream Scene is inside a Skokie Park District building located on Oakton, just east of Cicero. There is a big sign on the side of the building saying "Scream Scene" in big letters.

There wasn't any wait entertainment the night I attended.

Free. There is a giant parking lot where the building is, just as you enter off of Oakton.

One thing I would like to say at the beginning of this review, is that this house I believe is sponsored by the Skokie Park District, so it is as "refined" as some of the houses. But do not tell that to the other people in my group, who screamed early, and screamed often.

The rooms themselves do not have a lot of detail, but what they have is a great quality of detail. They do not spend a ton of money to fill the room with gore, or extraneous props. But what they have, and what they use is really well done and very scary.

The actors, while on the youthful side, still do a very good job at knowing when to pop out and give you a good scare. The masks are good, and the makeup, especially when you get to the clown area is really creepy and scary.

They have some of the classic rooms, your house settings, your doctor's office, but the real best part of the house is the clown area. They know that clowns scare people and about half of the house is dedicated to clowns.

What they do differently than most houses, is they end up having a clown maze. The maze part is twisty and turny and they have up plastic circus tarps on all the walls. When you walk in to the rooms, you don't know where to go, and have to figure out which wall is the one to go through, and my group ended up getting lost several times. It did not help that the maze had a bunch of clowns lurking throughout the maze.

Overall, I think Scream Scene was good. Although you can tell it is more geared toward teens, and most of the actors in the house are teens, it doesn't diminish the scare factor at all. What they lack in a lot of money, they made up for in scares. While some of the plastic tarps have been used several times, I think it helps with the ambience that you are in for some scares. And the best aspect of the house was the clown maze, which was very well done.


To find out more about this event, visit:
http://www.screamscene.org