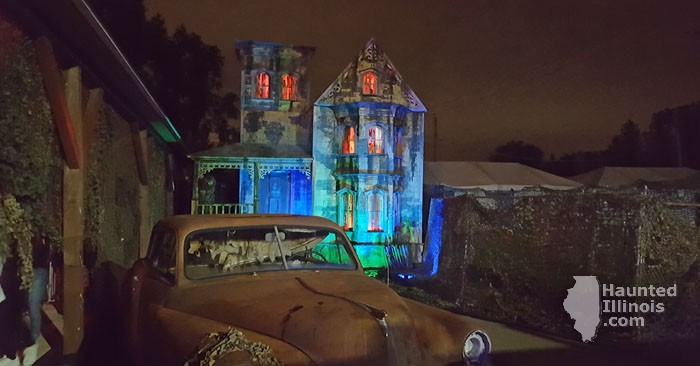 Realm of Terror is located in Kristof's Entertainment Center, off of Rollins Road. I always seem to drive by it because it comes up on you suddenly in the middle of the street. There is some lights and a video billboard as well.

There were several actors lurking about, but they were all kind of standing at the front gate when I went in. They seemed to scare some people before when I first got there, and some people at the end

We did end up connecting to the group in front of us, and the group behind us caught up with us as well.

If you have been to the house before, you should know that they have completely changed the configuration, and for the better. They have ditched the concept of lab gone amok, and have gone straight haunted house, and I think this is for the better. It both begins and ends with mazes that are completely pitch black. You can not see in front of you for either of them, and I kept bumping in to the person in front of me and apologizing because the maze was so dark.

The rest of the haunt keeps you on your toes, there are many twists and turns in the place, as well as certain parts where you have to duck or dodge things in the air. I was worried one of the tall people in our group would have to go on his hands and knees at certain parts of the house. They also have both angled walls and ceilings in certain parts to give you a very claustrophobic feel to the house.

The attention to detail throughout the house was extraordinary, parts of it were very gory and creepy, and certain parts looked very realistic. Both the lighting and props helped. There were rooms where there were a lot of things hanging from the ceiling, be it bodies, cables tubes, etc. to help give the rooms an extra creepy feeling. Each room would have lighting coming from all angles and colors, and there were even a couple of strobes brought in to make it worse.

The actors were also great. You can tell they really wanted to scare you and make you feel uncomfortable. Both their makeup and masks were seemingly done by professionals. In a few rooms I felt the actors really were monsters. They also knew the right places to hide, whenever they would pop out of rooms, they had perfect timing. It ended up though being a hindrance, as we caught up to the group in front of us, it became less scary.

The haunt was extremely scary, the more maze like aspect of the house in between rooms helped with the creepiness. The claustrophobic rooms throughout the house, as well as the attention to detail, made the house especially fun, and the mazes at both the beginning and the end helped make the house an enjoyment. I would definitely put this house on the list as a must see.

To find out more about this event, visit:
http://www.realmofterror.com