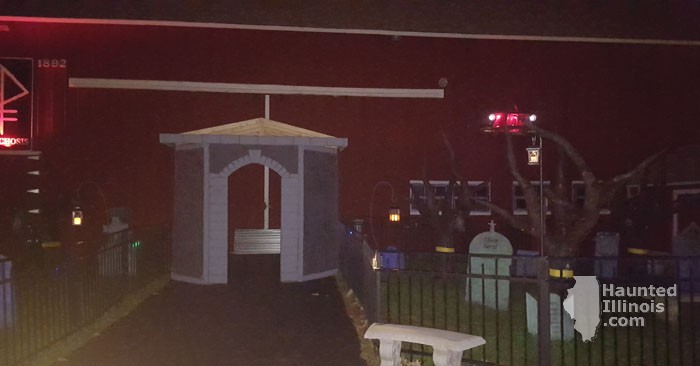 Psychosis Haunted House is located at 29w310 North Avenue, and is part of the Sonny Acres Farm Fall Festival. The Festival itself is only open during the day, but the house and haunted hayride are available at night.

I actually first went opening night last Friday, and there was a corpse bride walking around in the rain, but when I went Thursday, there were no actors lurking about.

Good, but I was the only person going through the house at the time.

When you first walk in, there is an elevator that is supposed to send you down many stories, and usually that kind of elevator is very bumpy and shakes you around a lot. This one was different, however, because the elevator barely moved.

The rooms themselves had some nice details to them. They had some good radioactive rooms at the beginning, and the little house area was really well done. They had a couple of dark mazes that were also well done and one had a strobe area that I thought was a great bonus.

The actors in the house I thought were really good, but there were not enough of them in the house. I am not sure if there were a few missing due to the house opening on a Thursday, but there were a number of rooms that were devoid of actors. Some of the rooms I went through, while good, did not have anything particularly scary in them besides the details on the walls. One of the actors at the beginning of the house kept coming through some of the rooms, either to keep scaring me, or to cover for missing actors.

The house itself is built inside a barn on the Sonny Acres property, which has its own share of issues. The rooms ended up being a little smaller than I believe they should be for decent sized groups. I am not sure how many people they let go in at a time, but if it is more than two or four, it could get pretty cramped in some areas.

I had originally gone to the house on opening night and there were some technical difficulties which caused the house to open late. I went back to the house again a week later to see if it would be different than my original viewing, and it had not changed. It is a good house with a few good scares in it. The actors stayed committed to their roles and kept the house entertaining. I just wish there were more actors, and wish there was more to the house itself.

To find out more about this event, visit:
http://psychosishauntedhouse.net/