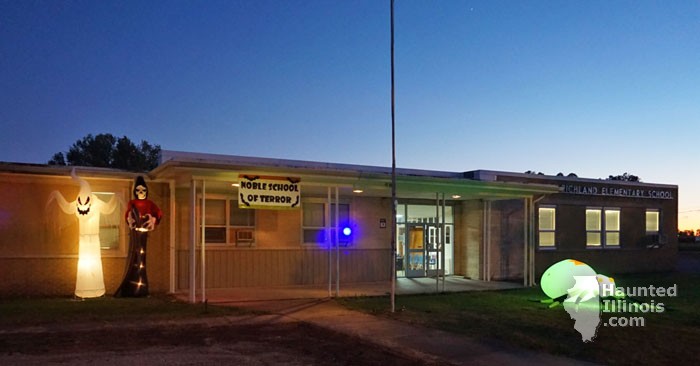 This event was easy to find. GPS took me right there. There was also a sign in the downtown area to lead you in the right direction. Once we were closer to the location, an Inflatable spider & other spooky inflatables, as well as various colored lights near the entrance let us know that we were in the right place.

I arrived early in the evening and there wasn't any wait entertainment, but with the short line, there really wasn't a need for any.

They did well in this category. I didn't see any other groups on my way through the haunted house.

I would call the Noble School of Terror a very "old school", back to basics attraction. This haunted house consisted of a series of black walls of basic construction, which guided guests along a twisting path where various scenes were set up. These scenes were simple, yet effective. While there were not a lot of expensive props, it was easy to see that a lot of thought was put into the layout.

Throughout the haunted house, multiple mechanical sounds, horns and loud sound effects were used to compliment the scare attempts. Accent lighting was accomplished with the use of purple Halloween light strings and rope lights, which provided sufficient illumination to navigate the path ahead.

Some of the notable scenes included the silhouette box, the mad doctor, the hallway of doors and the endless hallway. The silhouette box was a tall enclosure wrapped in opaque plastic. The actor inside was backlit, so you could see his silhouette against the "walls". As we walked by, he rattled the plastic with his fingers, making a creepy sound. When we arrived at the asylum, the mad doctor asked for our help to find his "patient", which ended up being a girl in a straight jacket who was trying to escape. The Hallway of doors was fun. As we walked along, one of the doors opened just enough for the actor on the other side to reach his arm through. As we passed by several doorways, this "mystery character" engaged our group in dialogue and he interacted with us along the entire length of the hallway. One of the most visually appealing areas was the endless hallway. Constructed out of wooden pallets, a clever visual effect made it appear that the hallway extended much further than it actually did.

One of the most elaborate scenes, which was also my personal favorite, was the pirate ship. Stretching more than 10 feet in length, this prop was well placed as the centerpiece of the scene. While walking through, the pirate actress gave a very convincing performance and distracted us, as a set-up for a good scare. The open casket scene was also a favorite of mine. Although it was one of the more simple scenes, I really enjoyed the performance of the nun. She had a blood-curdling scream.

While some of the actors were shorter and not very intimidating, they were all enthusiastic in their roles and followed through, without breaking character. The majority of the scares were of the pop-out variety; however, there were still a number of actors who were interactive, which made for a more enjoyable experience. Most of the costumes were somewhat basic, but they fit in well with the scenes they were in. There was also a good mix of masks, prosthetics and horror makeup.

As customers exited the building, there were all given a sticker indicating that they "...survived the Noble School of Terror". That was a nice touch.

When I first arrived in the small town of Noble (population: 700), I wasn't sure what to expect of their haunted house. After going through the attraction, I found it to be a fun event. Noble School of Terror has a few great scares, but isn't overly intense, so it would be appropriate for most haunt fans.

It is also for a good cause. On their Facebook page, it says that a percentage of the proceeds from the event would go to St. Jude Children's Research Hospital. It was definitely worth the admission price, especially when you consider that part of your admission is going to charity. If you are looking for some good Halloween fun, be sure to give this one a try.