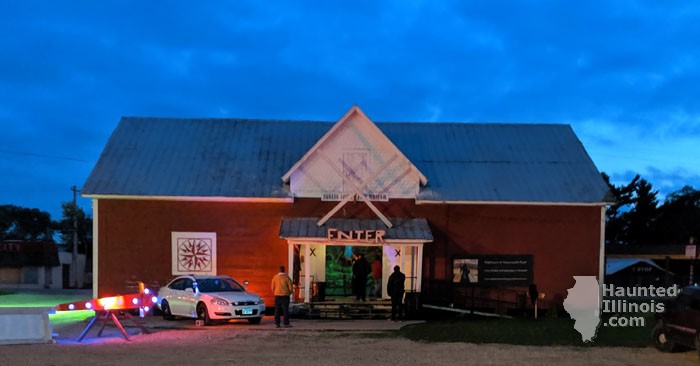 Nightmare on Fairgrounds Road is held at the Bureau County Fairgrounds on Route 34 in Princeton. The fairgrounds take up a lot of real estate on the highway, so it would be hard to miss. There is a large sign for the haunted house at the entrance, and there is also a large sign pointing to the building that the show starts in.

I arrived pretty early on opening night, so I was not in line to buy tickets for long. There, I did see a guy dressed in tame burlesque attire and a DJ with a similar outfit. There were a couple of larger props to look at, light displays, and music to set the mood.

Outdoors and in between buildings, I did see more characters roaming around; like a clown dragging a body bag, a scarecrow, and a fun pumpkin character. There were a lot of line actors in the wait area for the first building, where the haunted houses begin. Everyone did a good job being eerie and creeping around people.

I did not run into any groups that went in ahead of me, and no one caught up to me. Groups were spaced pretty well in both buildings.

Once I purchased a ticket and was granted entry, I was directed to a detailed pirate scene for a photo op. Then I was asked if I wanted to participate in Dimension X, which is more of a sensory based attraction. I accepted and they handed me blinders and told me to put them on. Totally blind, I had to feel my way around walls, people, and different textures. It was a fun side show to walk through.

After I returned my blinders, I was directed outside to a hayride. The hayride drove a group of us to the first haunted house, and a character in a top hat welcomed us and helped people off of the trailer and into the building. Here, there were several actors weaving through the people in line. There was a loud drum that we could hear on the other side of the entrance, which set the ominous vibe before entering. When it was my turn, I found myself outside of a funhouse with a tiny, crooked door. There was a crazy old guy asking me if I really wanted to go in there. He and his doctor held me back for a little while, and when he banged on his drum, it was my turn to go inside.

The first part of this attraction showed off a lot of their clown scenes and fun house type interaction. A scene that I really enjoyed was a black and white maze with a very jagged path, strobe lights, and a character that only peeked their head around the corner ahead of you and then disappeared over and over again. There were a few clowns that had loud and effective jump scares. I got to walk through a 3D area, a spinning tunnel, and several scenes that had a plethora of Halloween memorabilia and props to look at. The funhouse portion of this show even smelled like cotton candy at one point.

The second part of this attraction had more of a pirate theme to it. Some memorable scenes include a bridge that I had to walk over while actors reached for me, a different bridge that had its own startle effect, and an area where I had to walk through water to get to and through a pirate ship. Some of these scenes were pretty convincing and detailed.

I had a good time at Nightmare on Fairgrounds Road. It was clear that the actors enjoy what they do and they were having a good time. I was in what very well may have been the first group of people for the season, but it didn't seem like there were any new actors or that the seasoned actors hadn't been in their zone for a few months. Everything went smoothly and the actors did a great job.

To find out more about this event, visit:
http://NIGHTMAREONFAIRGROUNDSROAD.COM