2019 Nightmare At The Terrace Review 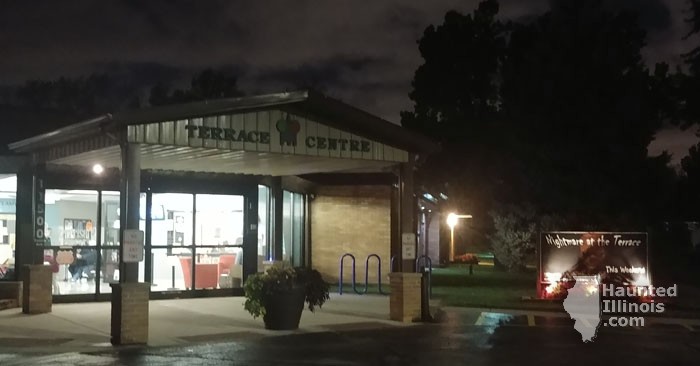 The haunt is located at the end of a long street, but there is a large sign with flashing lights and balloons on the corner, as well as two large signs outside of the haunt building. A GPS will get you right to it.

On the night we went there was no wait entertainment.

Low-Medium, depending on visitor age

Crowd control was not an issue, and groups were spaced out appropriately so that visitors didn't run into anyone else inside the haunt.

Nightmare at the Terrace is a local haunt that is staffed almost entirely by younger actors (grade school and perhaps some high school age actors), so for anyone expecting a professional haunt this is not it. However, that does not mean that the haunt is not entertaining. Each year there is a new theme, and this year's theme was Alice in Wonderland, featuring scenes and characters from the famous novel.

In the first scene visitors are greeted by the white rabbit, who worries about being late, and rushes them through into the next room. From there visitors encounter the Cheshire Cat, a dancing flower who creepily sneaks up behind visitors and whispers in their ears, a white rabbit, Tweedle Dee and Tweedle Dum (both quite creepy), the Mad Hatter, the Queen of Hearts and more. Each room has a different theme reflecting a scene from the novel, so those familiar with it will recognize most of the scenery. Scares here are mostly of the jump variety, with actors coming out from hiding places and then following visitors into the next room. As most of the actors are younger, your scare mileage may vary, but there were several clever scares present.

Following Alice in Wonderland, the theme shifted to movie monsters, and featured several of them, including Michael Myers in a room filled with body parts, Freddy Krueger in a child's bedroom, A little Chucky hiding amoungst a bunch of dolls, Samara in the room with televisions showing static, Pennywise dancing in a corridor, and even Jack Nicholson from the Shining wielding an axe in a bloody bathtub. Overall, a nice variety of scenes and good performances from all of the actors made for an enjoyable experience.

Finally, there was a cool room with corn stalks and a couple of creepy scarecrow-like characters, and the final area where an actor thanks you for coming and points you to the exit. Naturally, visitors expect something to pop out during their walk down the dark corridor to the exit, but nothing does. In a twist, the scare is saved until visitors are well outside of the haunt. A clever variation of the standard chainsaw guy at the end of the haunt theme.

For a local haunt staffed by younger actors, Nightmare at the Terrace delivers some clever scenes and creative scares. Although some of the scares can get monotonous, the variety inside the haunt helps keep it interesting. It could be a little longer, but if you're looking for a less intense haunt that is still enjoyable, you can't go wrong here.

To find out more about this event, visit:
http://www.worthparkdistrict.org