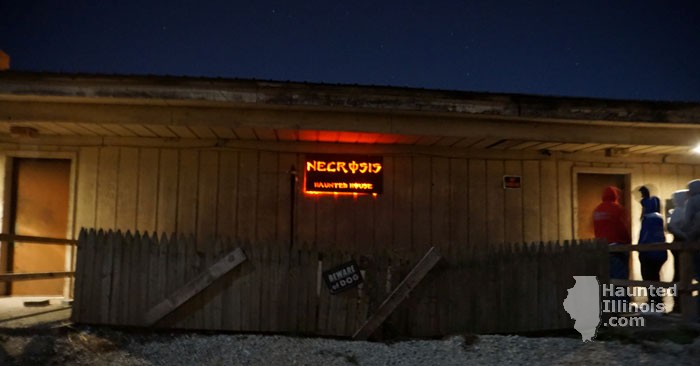 This event was easy to find. My GPS took me right to it. Parking attendants were on hand to help patrons park.

There were a couple of costumed actors in the queue line area, to entertain the customers. Customers wait outside the building and when ushered in, they enter directly into the attraction.

Other than the queue line, I didn't see any other groups while going through Necrosis. They did a good job in this category.

Necrosis Haunted House started off with a great introduction scene. It all began with the staff locking you in a chain-link fence cage. I don't want to ruin it for everyone else, but let's say that the theatrical "release" of our group was fantastic!

Continuing through the rest of the haunted house, I encountered many scenes that were very highly detailed, along with others that were more basic.

Some of the simpler scenes included a corn stalk maze with a sneaky scarecrow, a green laser swamp with a surprise scare, an industrial chain-link maze with stacks of 55 gallon drums, some dark pathways and a domed tunnel hallway.

Some of the more elaborate scenes were the backwoods shack, the diner and the hotel.

The backwoods shack had a detailed front porch with a door falling off and the living room had a dirty couch & crooked shelves on the walls. Moving on to the bedroom, there was an actress sitting on a bed who stared at us as we walked by. In the corner of the room there was a pile of stuffed animals. Where an avid haunt fan might expect a classic scare in this area, nothing happened.

The diner also was well done, complete with a counter, diner booths, disgusting "food" served to customers and cobweb-covered light fixtures. For added effect, the lights flickered and dimmed. The waitress who asked us to stay for dinner performed well. She was creepy and disturbing.

The hotel was also highly detailed. Starting in the alley, there was "Necrosis" graffiti spray-painted on the walls and a steel fire escape ladder within reach. When my group moved to the inside of the hotel, we checked in at the front desk, where the desk clerk was a hysterical clown. Throughout the hotel, there were accurate reproductions of various areas, including a guest room hallway, a laundry room and a few guest rooms. It was so realistic that I could easily imagine that we were actually walking through an old, run-down hotel.

Dark hallways were used as a transition between some of the scenes, while colored lighting and dark music soundtracks were used throughout the attraction. The whole adventure ended with a traditional haunted house scare.

While the scenes were well detailed, acting was a bit hit and miss during my trek through Necrosis. Most of the actors seemed very enthusiastic in their roles and the majority of them stayed in character; however, there were a number of mistimed scare attempts, including drop panels that were triggered for the first person in my group. Since I was at the tail end, I heard what happened to the people in front of me, but unfortunately was unable to experience it for myself. Also, there was one occasion when I walked into a scene and caught two actors talking to each other. They just continued to chat, until I exited the scene. That was a bit disappointing.

Overall, I really enjoyed my visit to Necrosis. The level of detail in a lot of their scenes was fantastic. It's just unfortunate that there were actor issues on the night that I attended. I believe this to be an anomaly, so please check out this attraction if you get the chance. We will definitely be back in the future to see how this attraction evolves.


To find out more about this event, visit:
http://www.217fear.com