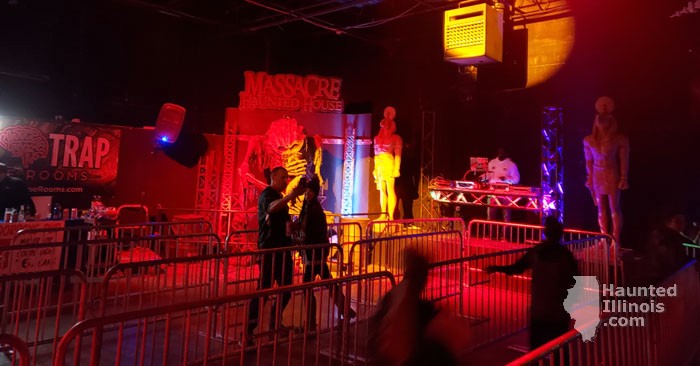 This location was easy to locate, and I was able to use Google Maps to get me directly to it without issue.

While waiting in line I did see many costumed actors interacting with guests as well as a DJ playing music and a large screen playing videos. This area was not really themed, but it was fairly basic line entertainment.

Crowd control was not great. We continually ran into a very slow group in front of us and that really stopped us from seeing scares correctly and any attempt at crowd control was really poorly handled.

Upon arriving at the location, we were able to locate the strip mall that the haunted house is located in. there really was not extensive signage along the road to locate this show. As a note, the entrance to the show is around the back of the building and the sign for this attraction is located on the side of the building. There was ample parking in both the front and rear of the building, however the lot in the rear is a bit smaller and will fill far faster.

After getting out of our car we followed a small paved sidewalk around to where the entrance was. We found that getting in this door was a challenge. The crowd control was awful here and we were cut several times by a group of teens. The staff working this area watched and did nothing to prevent it.

We waited close to 18 minutes to buy tickets, again being cut repeatedly. When we finally reached the window, it didn't take long to get our tickets, nice and quick. When we got our tickets, we were directed into the general admission line.

There seems to be a good amount of space for lines to wrap indoors, keeping everyone out of the elements. In the wait area we did briefly seem some costumed actors interacting with guests. Aside from this they did have a DJ on site, a spot to buy some drinks and a large screen playing videos. This area really wasn't themed; however, it was sufficiently entertaining while we waited, plus not being outside is nice.

After about 35 minutes in line we finally reached the front of the line. We were greeted by a very entertaining clown with his puppet, he did a great job of entertaining and getting a reaction out of guests, this is a great example of having fun with people without necessarily depending on the scare.

After a little interaction we were called to get a picture taken and had the ability to buy some to be printed when we exited the show. This was nicely handled as we were not stuck carrying them through the show, plus they upload them online where they can easily be posted to social media, unlike some shows.

After getting our pictures we moved over into the rules room, there were two other groups here and we waited about 5 minutes. We were given the run-down of the basic rules and after a short wait we entered the show.

We entered directly into a cell block of sorts where we were greeted by a couple actors and continued moving through a prison type scene. We moved through a variety of rooms with some actors, honestly this show felt really empty, we saw the same actors pop up over and over.

As we were moving through the show, we kept running into the group in front of us, they were moving very slowly. We tried to slow our own pace, however, would back up other groups as a result. Crowd control is kind of poor. We added a good 5 minutes to our time through the show by this alone.

We continued through the show and saw some really great scenes, the theming and set design were great. Things looked really good. Some scenes that we enjoyed were a mausoleum, Church of Sin, and the swamp. All of these sets were awesome, the actors were well themed and played their roles well.

We did see a little bit of crowd control in the Church of Sin, however felt that it was excessively long and asking to confess our sins is a bit excessive. I understand how interaction is key but felt a little odd and annoying more than anything.

After we got moving again, we moved through a good variety of scenes and spent around 18 minutes in the show total. At the end of the show we were greeted by a clown and provided 3D glasses for the next portion of the show. There was a little bit of an initiative to lead some crowd control here, however felt this actor was way over aggressive with patrons and honestly found it really annoying. It took us around 5 minutes to get into this next part of the show.

After we finally go out of this line, we moved through a very well done UV reactive clown paradise of a show. While it wasn't super long it was a lot of fun seeing a different aspect of haunting. This area had some actors however was really lacking. We again only saw a couple actors the entire time we were in this section.

Once we reached the end of this portion of the show, we moved into another. This part was more along the lines of a large industrial scene and had some really great sets. Overall, we were in this last part of the show for around 8 minutes where we exited from the front of the building.

In review, we didn't really see this show being scary, got met with a lot of actors playing multiple scenes and being way over aggressive, not so much in a scare way, but more along the lines of their dialogue and trying to be intimidating. There were not nearly enough actors in this show. With as much hype and advertising they do; I do not think it has nearly enough staff to be a super effective show. Many rooms felt empty and being this early in the season I would expect more.

The shows sets were fantastic, you can tell how much effort went into them, the themes all flowed nicely. I think they have something truly great with this.

Makeup was good, each actor did get a nice makeup job done on them or were wearing a mask of some variety. One note here would be to lose the fake teeth in some cases, seeing each actor with the same set over and over got a little old. Especially when there are so many great products available to enhance a character in this respect.

To find out more about this event, visit:
http://fearthemassacre.com