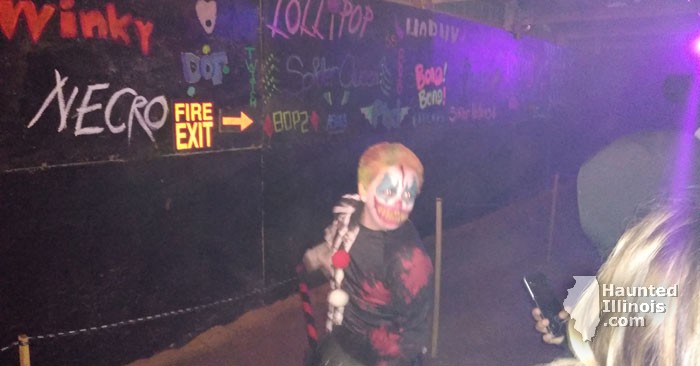 There is a dark red marquee sign that has the haunt name on it, along with a hearse outside the location. No other signs were visible, and it was unclear exactly where the entrance was due to lack of signage.

There were two kids dressed up as clowns roaming around doing high pitched screams, and a girl clown that was in all black with a neon painted face. There was also some kind of demon walking around with a red cloak. They did not seem to be interacting much with the crowd, save for a couple instances where they invaded personal space by getting in people's faces. Toward the end of my wait in line, I also saw a male clown/ ringmaster with a green top hat who was asking the crowd to take pictures with him. The que line was decorated with neon writing on the walls, colorful strobes, and a black light cannon. Club music played over loud speakers, but after an hour and a half of waiting in line, hearing the same four songs on repeat got a bit tiring.

There are 2 haunted houses, back to back. When you get to the second house, you sit and wait for the Doctor to see you. The group I entered with did not catch up to any other groups, and no groups caught up to us.

"Ringmaster Marie" and her monsters (Dom Dom, Horny, and Bang Bang) start the show for "Karnival" when you enter the circus tent themed room. Different carnival type sayings cover the walls- such as "don't laugh." A red light (coming from the ceiling) shines down on a bunch of wooden spindles of different heights. There is also a wooden bench that wraps around the entire scene. Ringmaster Marie gives you the house rules, then (after questioning you on them to make sure you understand) brings out her whip and the 4 characters direct you into your groups. I have to give it up to Ringmaster Marie- she did a wonderful job keeping you interested in what she had to say.

Once we entered the carnival portion of the show, we walked into a red and white striped hallway- complete with strobes, and red and white striped fabric that we had to push through. The clown "Bang Bang" followed us from the first room- walking above us as we went; trying to torment us and distract us as other clowns popped out to try and scare us. We entered what appeared to be a storage room, where we were given a pair of 3D glasses (as the remaining portion of the show was filled with 3D art scenes and blacklight).

We came upon a girl clown on the ground, who said she didn't want to be a clown and was asking for help. When we offered her the help she was seeking, she just repeated herself. A colorful room with laser lights, fenced walls and heavy fog contained an actor dressed in normal jeans and very little face makeup. He told everyone in my group that we smelled good. The finale of this house found us in a claustrophobic hallway, with airbags that pushed us onto the next scene, and the start of the next haunted house: Karnage.

Upon entering into "Karnage" from "Karnival" the rooms are very low light, and contain substantially less detail. We were welcomed into the house by a patient / nurse sitting at a table. She had us sit on benches (similar to those in the beginning of "Karnival"), advised us to wait for "Dr. Gloom and his family of freaks" and took our 3D glasses back. As we waited, she told us the doctor was running late due to "rusty tools" that had not been cleaned. When it was our groups turn, the patient/ nurse sent us in advising that "the doctor was ready to see us now."

We began in a dark hallway, leading to a medical scene. An actor sitting in a chair (hunched over) jumped up to try and scare us as we entered the room. He advised that he was "Dr. Gloom" and that we were late for our surgery. He began fumbling around (looking for his tools), and we continued on through a hallway of IV bags. We entered into an area with a kitchen scene, displaying blood and guts everywhere. An actress wearing a black apron in a black and white sweater told us that her boyfriend had cheated on her, and she cut them up. She proceeded to ask us if we were hungry for any body parts- before the rats got to them. We exited the room through a set of doors that looked like refrigerators, and came upon a hallway that looked like a torture bedroom- complete with a bathroom scene containing heads inside the bathtub.

Some other mentionable scenes were a factory runoff- containing barrels of garbage, and an actor who jumped out from behind the barrels telling us not to touch his garbage; a spider webbed area with spiders and webs that you have to bend over to get past; a room with body parts on a table and a larger actor who grunts at you and starts his chainsaw; a graveyard scene with a wooden bridge; and a small cemetery scene with tombstones and a grim reaper type character who asked if we wanted a grave. The actor here I would like to mention as he played along with me very well when I pointed to a plot and "picked a grave." He told me I was too big and would need to be cut in half to fit.

Not to give it away, but at the very end of "Karnage," you exited with a scene designed to "light you up." I could see this being effective for people who are not avid haunt- goers (such as myself).

Overall, I feel this haunted house has a lot of potential, but could use a little more lighting, and a few more actors building up the storyline. I will also state that I am not a fan of having kids in the queue line. To me that isn't scary or entertaining, and I would be worried about their safety. High pitch screaming is not queue line worthy, and I feel the other queue line actors could spend more time interacting with the crowd (instead of just staring and walking away, or pressing customers to take their photo).

If you live in the area, I do recommend checking this show out. For the price, it's a decent show. I can't wait to be back again to see if any changes are made for next year.