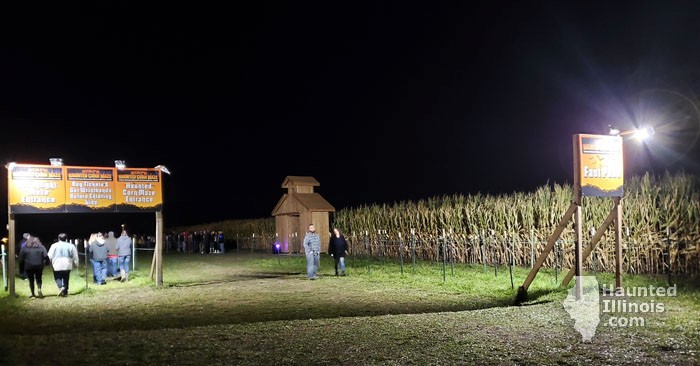 It's been a few years since my last visit and it's super easy to get to so I relied on memory and forgone on the GPS.

Nestled in the darkness you see the buildings of the Pumpkin farm lit up. The entrance comes up on you a little fast, but it's ok if you pass it there is a road just past the farm and you can turn around there. There was no heavy traffic.

They had a few costumed characters walking between the queue line. Loud heavy music was being played near the entrance.

They had a great flow of guests and the actors had to do the minimum to keep the control of that flow. There did not seem a huge gap between groups when they sere sending people in.

I did however, maybe a quarter if the way in, catch up to a group of guys that were sent in ahead of me. This was no fault of the attraction they were being cautious and would point things out where a scare would be or if an actor would be hiding somewhere. They were pretty much wrong most if the time. They were getting nervous and did not want to seem chicken in front of the bros.

There is a point in the path where there are a few additional mazes, multiple corn paths, white out and the ever effective whiteout / red and white / strobe maze super combo. The latter really messes with your senses and can make any pro look lost.

At one of these points I did gain the upper hand and was fortunate to choose the correct direction and actually end up about thirty feet AHEAD of them.

The corn maze is just that. You're outside surrounded by towering ears of corn which make very effective barriers. As you walk, you come to stand-alone structures and open area scenes. Here you will interact with most of the actors. Sometimes you will see a few actors Walking the path, my first stop was the redneck cabin, with a few very effective scares and it was surprisingly loaded with actors. You can't have a backwoods cabin without a jail nearby. The sheriff was guarding his prisoners making sure none of them escaped. While traveling, there is very little to no light, except for ambient light from the farm stands and other planted light in the corn to help guide your way. It's just enough to show the path but not enough to blind you or the actors.

After a bit of some alone time between your group and the corn, you may encounter some of the corn's keepers, or are they residents? Lost children maybe Scarecrows with souls? We come to a butcher shop, but it looks like the tales have turned and the livestock is selling human meat. Like many of these areas, you may see two or more actors nearby.

In parts, you may never see the actor coming or you will spy them from afar as they get closer to you. We continued walking to a small asylum and a few inmates had gotten loose. There is another shed or room to look like a house, with some well hidden scares. The point comes where you see not only one but two squeeze walls in a corn maze, you know they have a well thought out planning team.

Making my way to the three ring circus, one of the larger themed sections, you will encounter many clowns. This will have the most actors in a single scene. I was not lucky enough to see the full chainsaw run. The position was vacant because they already had chased out the group in front of me, and by my guess it was a pretty far distance from the exit of the corn maze.

This was an actor driven show. There were very few animatronics or effects for any of the scares. If an actor was playing a role other than a lunatic, they had dialogue which worked out for them, they didn't have to resort to snorting or even yelling at every guest. That was a nice change.

To find out more about this event, visit:
http://heapshauntedcornmaze.com/