2019 Hayride Of Horror And Curse Of The Bayou Review 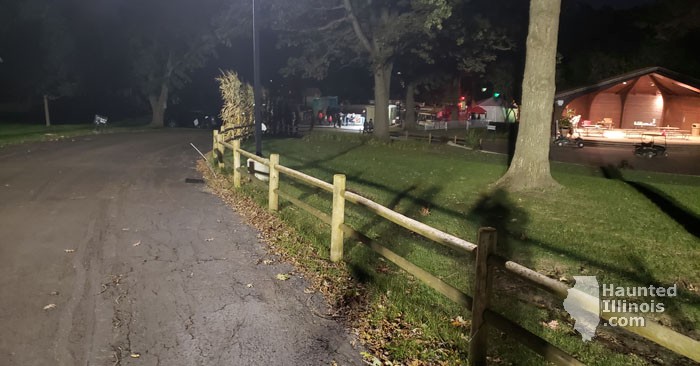 There seems to be ample parking at this location. There are a variety of parking lots in the vicinity of the event on park property.

The lots are not super bright, nor are there any real signage on the main road to identify that there is an event at the location.

The event is not visible from the road, however it is fairly easy to find once you get into Dellwood park.

While waiting in line there was a good deal of costumed actors interacting with guests as well as music playing to entertain guests.

This show has a couple options for tickets.

General Pass (choice of ONE of two attractions) $15

There are also a couple of group pricing discounts on their website for larger groups.

Crowd control was decent, due to the nature of this event there really aren't any options or needs for extensive crowd control.

Hayride of horror and the curse on the bayou is a uniquely fun show that is geared towards younger haunters. This is a family and kid friendly attraction that offers a lot of fun for the whole family. This is by no means a high scare show that many people may be accustomed to. But it does offer great value for what you are paying and can safely bring your kids to.

Upon arriving at this location, we were able to find parking within Dellwood park and one of several lots on location at this event. It seems that parking is ample, however it is always recommended to arrive early to any show, especially late in the season. While driving up we did not see any extensive signage or identification that told us we had arrived.

Once we got out of the car the event was relatively easy to locate, it is really the only thing lit up in the area since it is a rather large park. We followed the lights and saw some signs directing us to the box office. It only took us about 2 minutes to but tickets and get directed to jump in line. We decided to buy the multi attraction pass which got us into both the hayride and curse on the bayou for $25.

The line we faced was quite long and really did not move fast. It took us nearly 1 hour and 15 minutes to reach the front of the line, and we did not really have that much of a line in front of us. My suspicion is that they opened late and needed to get the actors in place. This is a very large park, so nothing on the hayride was a short distance. Once the line did start moving around 7:45 we did make better progress to the front.

While waiting in line we did see a good deal of actors and actresses interacting with guests, I think these individuals were far older than the remainder of the people throughout the show, which is understandable given the risks of working a line in a haunt. Some actors that stood out to us were the larger, bald headed man who was interacting with people and the girl with a wonderfully glowing makeup job. They also had music playing to help keep people entertained.

When we finally reached the front of the line we were greeted by a staff member who took our ticket; however, I was a little unclear of where we were supposed to go. Only after a bit of wandering we were directed into a large white tent that acted at the rules room. This tent really wasn't extensively decorated; however, it was fairly to the point and the actress explained the rules and interacted with guests. We were here for about 5 minutes before we were escorted down a trail to board the hayride.

It took us about 5 minutes for our tour guide to arrive and get us on the hayride. Once we were onboard, we began moving. We saw a great variety of scenes along the way, many of which would have some scare factor for our younger haunter crowd. We had many laughs at their creativity as well as some of their mini skits that we went through and by. It should be noted that each scene is spaced a bit apart at the hayride does take a good deal of time.

Some of the scenes that we enjoyed were the Clown bridge, where we had actors popping out from all directions and made it a fun experience. We also really liked the zombie graveyard and the pseudo force freakshow with a variety of "act" like a contortionist and wonderful bearded lady who fit the part well. The end of the hayride was a lot of fun and while it was sort of a sudden stop without much direction it did a good job of immersing us in the experience.

After we got off the hayride we were directed over the tent where we would wait to get into the curse on the bayou. In this tent we were greeted by a group of pumpkin eating actors and a fun pumpkin decorated photo op. We waited here for about 5 minutes before we were directed to the entrance of the show. This show is a walking portion, it was a little confusing to us as many of the actors were quite young and I'm not sure that they fully were trained in how to keep groups moving in a haunt. This was not a big deal as it was still a lot of fun to see the creativity of the kids.

This show was surrounded with the story of the curse on the bayou. Sets were simple but fun and they even worked in a small maze that had some challenge to it.

We were in this show for around 8 minutes total where we exited out back onto the midway where they had vendors, photo ops and a fire to warm up by.

Overall, we can say that this event was fun, while it is much more geared toward younger haunters in training and families, I can say it was enjoyable and while it was not super scary it did provide good entertainment for the price. Do not go to this show if you are expecting a massive show with a limitless budget and high scare factor, but if you are looking for good family fun, I recommend it, especially for kids who are just started going into haunted houses.

Actors were in a good mix of costumes and makeup and you can tell they took a lot of effort into putting some of the pieces together. They did a great job for being a small show.

This show will be fun to follow over the years to come and we are excited to see where it goes.

To find out more about this event, visit:
http://www.lockportpark.org/HayrideOfHorror/