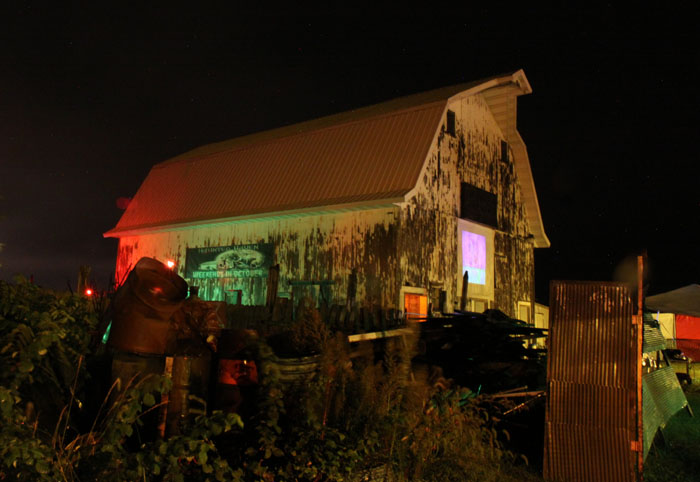 Haunted Haven was easy to find. GPS led me right to the location and the backlit arrow sign on the corner also helped. The attraction is held inside a large barn, which had a creepy ambiance of its own. Additional sections of the event and the queue line are outdoors, so dress accordingly.

Various costumed line actors were out in the queue line area. One at the ticket booth was directing customers (in character) to the correct line and a couple of others were milling about, interacting with the crowd.

They did a great job with crowd control. The night I attended just happened to be the same night they had a guest appearance of Tony Moran (the original Michael Myers), so there was a very large crowd. Inside the house, I never saw any other groups. The only time we ran into another group was in the outdoor maze (more about that later in the review).

Please note that the review on this page will only address the haunted attraction. Click here to see pictures and a summary of the celebrity appearance.

This year, Haunted Haven had a prison theme. The tour started as customers were asked to board a prison bus. The correctional officer inside directed everyone to sit down, while she read the rules of the attraction. After she was finished, she directed us to exit out of the back of the bus.

Since we were a new group of "prisoners" just arriving at the facility, we were lined up in front of a mugshot backdrop, with height markings, to have our picture taken. This was actually a clever photo-op setup, where prison staff took pictures of us (both straight on and profile) with our own cell phone cameras. Before leaving this area, we were asked to share the pictures on social media.

The next area was a prison yard, with a winding path. My group was attacked from all sides by inmates, some of them encouraging us to stay with them, while others were telling us we needed to escape. Even though this area was eerily quiet, the actors were still able to catch us off guard. They were very stealthy.

The prison theme continued as we moved on to the main part of the attraction, which was held inside of a large, creepy barn. The majority of the scenes were moderately detailed and all of them consistently followed the prison theme. Barred cells, stone wall patterns and other visual accents could be seen throughout the attraction. Haunted Haven made good use of various lighting effects, including colored floodlights, strobe lights and blacklight fixtures, to enhance the scenes and keep patrons off-balance. With the exception of noises emitted from the actors, many of the areas in the house were fairly quiet, so some additional sound effects and/or music soundtracks in certain areas would have been helpful to enhance the creepy atmosphere.

In addition to the standard cellblock scenes, there were some other notable areas. The psychiatric ward featured a crazy nurse wielding a hypodermic needle, padded walls and a variety of maniacal patients. Another set of hallways had white, blood-splattered walls with entrails hanging from the ceiling. At one point, two giddy, giggling clowns trapped my group in a small cell for a while, before releasing us into the next area. One of my favorite scenes had a fairly long hallway of glowing, angled bars that we had to duck underneath. On the other side of the bars was an actor on an elevated platform who harassed us as we walked through.

Exiting the barn, we then moved outside to a maze which was made of red and white plastic tarps. Having not seen any other customers up until that point, it was then that we ran into another group. Apparently, they had been lost in the maze for a while. With both of our groups working together, we were able to make it out of the maze fairly quickly.

The actors at Haunted Haven gave strong performances and stayed in character. While there were some pop-out style scares, most of the main characters were very interactive, which made for a more enjoyable experience overall.

I really had a good time at Haunted Haven. It was a fun experience and at $12 it is definitely a great value. Be sure to check this one out if you get the chance.

To find out more about this event, visit:
http://www.hauntedhaven.org