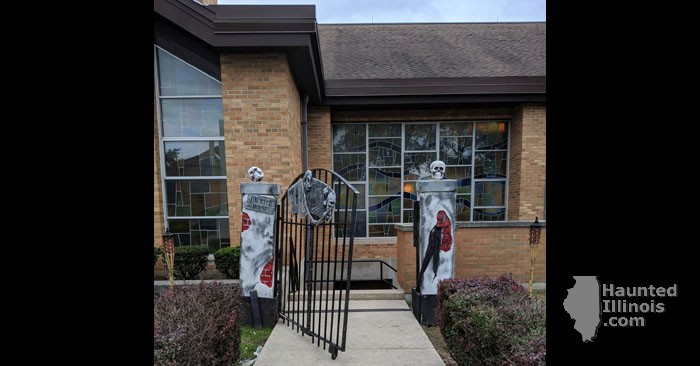 Plenty of signs and decorations by the St. Thecla church point the way to the haunt. Parking is available in the nearby lot shared by the church and the school.

Even though we were the second group in line for the event, and arrive ten minutes before the start time, we still waited forty minutes due to a delay in the haunt's open. There were concessions being sold at the ticket table, and a very talented actor in a gorilla suit entertaining folks in line for the wait. The line was outside and not shielded from the weather, so be prepared.

There were two separate staging areas within the haunt, each with a wait of under a minute, as well as two or three different rooms where the way forward needed to be shown to guests by actors after a good enough time for scares. We were allowed to move at our own pace until running into the group in front of us, who were moving particularly slow- so slow, the group behind us caught up as well.

Waiting an extra twenty minutes beyond the start time was particularly annoying because the cold weather, but being pleasantly surprised at an amazing display set up by volunteers was worth it. Our tour through the St. Thecla basement began with a stroll through a spooky park, complete with undead children, ominous eyes in the darkness, and a werewolf that seemed to step straight out of a movie. From there, the hillbillies' house and kitchen were a macabre scene that lead to the most disorienting hallway I've experienced in a while. If you can get past the wraith at the end, be careful in the sewers, and the terrifying room of cursed dollies (I couldn't get enough of this room: so much detail!). Squeeze your way through to the School of Angry Nuns (and youths) to register your stay at the haunted hotel. Lurch the Friendly Bellhop happily will show you through the hallways and other long-term guests. Try not to lose your way in the darkness; and the light at the end of the tunnel isn't as friendly as it seems.

If you make it further, keep your distance from the jungle cages if you can, though they don't look quite stable enough to keep in the giant apes. If apes aren't your thing, maybe you'd like to visit with some clowns once you make your way through the jungle. Don't like clowns? The Funeral Parlor might be up your alley, so long as you're not claustrophobic. Pay attention to the various stones in the graveyard, and pay your respects to Death before you venture back to the world of the living.

The attention to detail in Hair Razor's scenery and special effects was overall phenomenal, and very impressive for a small fundraising Haunt. The actors were decently costumed and stayed beautifully in character the whole time. I would've liked to have more ambiance music throughout the haunt to give it a much more immersive experience, but all in all, I had a great time. Appropriate for kids 8+


To find out more about this event, visit:
http://hauntedscenes.com/