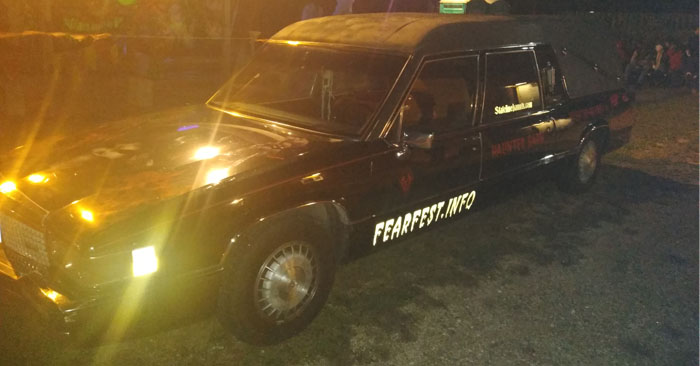 GPS brought us right to the location. A small reflective sign with the name of the haunt was visible from the street.

There were a couple roaming characters interacting with patrons outside of their respective 'houses.' There was a clown with a little dog, and 'Uncle Chuck' got us to laugh with his chainsaw. They also had a bonfire you could sit at if you choose to wait to go into any of the attractions, and a variety of music was playing in the background.

This location has three attractions. They are $15 per person per attraction, or you can buy a pass for all the attractions for $40.

Upon entering the attraction, we were held in a room made to look like a funeral parlor; complete with coffins and unique pictures hung throughout the room. We were told very quickly not to touch the actors, and then sent in with groups no larger than 6. While our group waited our turn, we were entertained by the character "Uncle Chuck," who was very funny and "loves" to shake hands.

Once inside the actual show, one of the first things we noticed is the floors. They are pitched at different angles, and covered with all types of materials, making for a very disorienting experience while walking. Some of the walls are even tight to squeeze through. (As a side note: If you have a hard time walking, or are claustrophobic, you might want to skip this haunt.)

Going through the attraction, we were attacked by scares from old school characters. From Frankenstein and his monster, to Tales from the Crypt. The lay out was set up very well, utilizing pop outs with dark hallways and corners. The actors timing in the pop outs was on point! The rooms were well- lit and nicely detailed. Overall, this show was very well put together, and made you rely on several of your senses.

This attraction featured some unique scenes; complete with flame throwers, chainsaws, and characters that jumped onto the moving tractor trailer(s)! The actors on this trail kept us guessing where they were coming from, as we felt attacked from all sides.

A scene I would like to mention that we passed by on our ride was an open cornfield. It created such a creepy and uneasy feeling, and myself and a few of the other riders were disappointed when no actor(s) jumped out to scare us here.

Besides that, the actors seemed to utilize the trail and surroundings very well.

This attraction was very interactive, with multiple chances to be "part" of your own show as you work your way through the different scenes. It was very unique and not something a lot of haunts are able to pull off. The only thing I can't help but wonder is how this attraction handles flow when the crowd gets heavier and lines get longer (as you spend a few minutes with each character in each room).

The first character we met was "Madam Tyrissa." She sat us down and asked if we wanted our tarot read, palm read, or a crystal ball reading. We chose to go with the crystal ball. She warned us of "freezing horror" ahead, and "electric death" in our future. When she finished, she commanded us to leave as we brought "dark entities" to her.

We went forth and entered a christmas themed room- complete with a clown sitting on the ground asking us to pick a present from under her tree. It didn't quite make sense to us why a clown was in a Christmas scene, but we went along with it anyways. We asked the clown what her name was, but she said she didn't know. She said that Santa wouldn't let her have a name because she had been naughty. So, we decided to name her "Naughty" the clown. When we opened her present to find nothing inside, she laughed at us and told us we must have been naughty like her.

Overall, the actress in this scene interacted with us as we would imagine a "naughty clown" in a Christmas scene would, but I do think a "naughty elf" in this scene would have fit better. I would also suggest to any actor/ actress playing a character in such an interactive show to be better prepared with a background story and name for their character.

As we wandered even further into the show, we ended up in a scene similar to a "horror museum." The character here was dressed almost like an elf or goblin- which again didn't make much sense for the scene. We were questioned about famous horror icons and their backstories. After guessing, we were told "Jigsaw" (from the movie SAW) wanted us to play his game. We were directed into a small scene covered in polka dots, and we could see the actor behind a curtain as soon as we entered. Unfortunately, he didn't make any attempt to interact or scare us, so this ruined any effect there might have been in this room. I also wasn't sure how the room tied to the Jigsaw character and SAW movies.

Overall, we enjoyed ourselves in each attraction. We felt it was a very family friendly event, with many things to do. We were even offered the option to purchase popcorn, candy, or cold/ warm beverages to enjoy around the fire pit after we finished our tour(s) of each attraction. This is definitely something I would recommend to families looking for something fun to do during the Halloween season.


To find out more about this event, visit:
http://fearfest.info