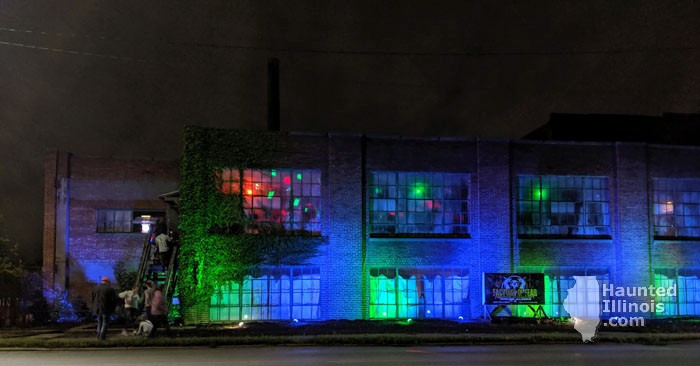 Factory of Fear is located in an old brick industrial building very close to the street on 4th Avenue in Moline. There is a sign in front of the building, and a sign near the adjoining parking lot. There are also a lot of colored lights that show through a large row of windows at the front of the building.

I bought VIP tickets online, so I was not in line for very long. I did see a creepy nurse character and a tall monster creeping through the crowd. There was music and what looked like a light show at a glance in the waiting area.

The crowd control here is managed pretty well. I was sent in alone, and I didn't run into another group until about three quarters of the way in. The actors here are very interactive, which helped separate me from said group. No groups caught up to me.

From the waiting area, I was directed to enter through a door at the end of a hallway. I found a stone well in an outdoor scene and the façade of a distressed building. I walked through the door of the distressed building and found the inside of a chapel. There was a nun who insisted on blocking my path and climbed over pews to get in front of me. At the front of the church, a creature ominously played a guitar. Eventually, I was allowed to exit the church and enter another outdoor scene where I met the occupant of a nearby trailer. She let me into her home and I found multiple rooms along the way; like a kitchen where I was allowed to taste the food she had on hand. I found the entrance of a voodoo priest's shack, and he held me outside for a few moments before he let me in. I walked through a tight maze through chain link and clowns hovering over me, and then through a claustrophobia effect where the walls expand and it's difficult to get through.

I found a locker room with very narrow walkways and a biohazard room where I was interrogated and warned that monsters are around every corner there. I walked through a medical area that was occupied by very energetic patients, and some kids' bedrooms with very creepy toys and artwork on the walls. At one point, one of the actresses in this area was legitimately climbing up the wall. I walked through a bathroom where I was invited to finger paint the walls with a character named Cici, and I passed by victims in a cage asking for me to let them out.

I walked into another shack where I was introduced to a disturbing deceased pet, which I absolutely refused to touch despite the actor's attempts. I have very few limits, but this was one that I could not bring myself to be even remotely comfortable with. I met a twitchy kind of guy who asked me if I was a cop and then offered me candy, and I met another backwoods character in a low laying foggy swamp area.

From there, I walked through a very long, pitch black maze, which is where I caught up to another group. Once we got out, we found the front porch of a shack, and Lucy met us outside. She welcomed us in and separated me from the earlier group. She held me back in her kitchen for a little while, and then asked me for her help finding her kitty. We called for the kitty together, and the cat found us. As I kept walking, I was introduced to even more kitties inside of a crazy cat lady scene. I was warned not to wake the child as I progressed, and then I found a very detailed kids' room with a funny kid character playing with dolls. Upon my exit, I turned a corner and was surprised by the biohazard area interrogator who warned of monsters around every corner earlier.

Factory of Fear was excellent this year. It seemed like attention was paid to all five of the senses; even taste. The scenes were detailed and convincing, and they transitioned well. The paths were very tight in some areas, which made for some uncomfortable situations. The make-up and costumes on all of the characters looked good. The actors in this attraction were very clever and incredibly interactive, and they did a great job with improv and staying in character throughout their respective acts. The show in its entirety was impressive this year.


To find out more about this event, visit:
http://www.qcfactoryoffear.com