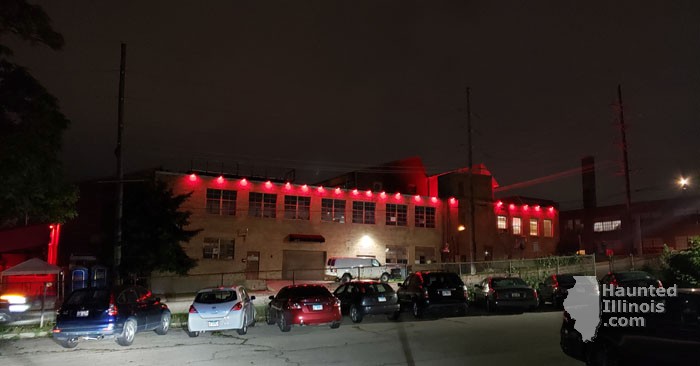 The location is fairly easy to find, there are signs in place to help identify what is at the location and there is a large parking lot across the street from the haunt. If you have attended this event previously, parking is still in the same location.

The lot is well marked and lit. it is easy to find from the road and Google Maps took me directly to the location without an issue.

While waiting to get into the show there were lines both inside and outside.

The bulk of the wait areas are decorated to match the haunt and there were several costumed actors interacting with guests. They also had music playing both inside and outside to keep the wait entertaining.

Crowd control was decent, we did encounter other groups backing up behind us, but this was likely due to us having someone with limited mobility being in our group and not so much the fault of the show.

Upon arriving at the location, we did see that Google Maps did successfully direct us to the location. The address on their website is indeed the address of the haunt and not the parking lot like other shows have done this year. It should be noted that their parking lot is directly across the street from the show and it is easy to find.

Both the haunted house as well as the parking lot had sufficient signage and you can absolutely tell where you are at. Especially given the industrial area of Elgin. We were able to find parking fairly easily, however, on busy nights parking may become limited and it does appear that street parking may be an option around the show. However, your mileage may vary.

After we parked, we headed over to the show, we saw their very decked out Evil Intentions bus out front with all of their lights and music blasting for wait entertainment outside. There were several costumed actors outside interacting with patrons. It should be noted that there is both inside and outside waiting, the vast majority is indoors from what it seems. On busy nights you should expect waiting outside at least for a little bit. We however did not have an outdoor wait.

While getting tickets we opted for fast pass this time around since we arrived close to 11:00PM and not early like we normally prefer. We did get through the lines fairly quickly; we were only in line for about 15 minutes total. Obviously if you are not fast pass you will have a longer wait. I can say this is another show that will be worth the added ticket cost if you are in a crunch for time. From speaking with people in the general admission line we saw they had close to an hour wait. These times will likely increase across the board as it gets later into the season.

This year's show is new, it is in the same location as years past, however they did move to the newer, multilevel portion of the building adding a ton of new space on multiple floors. With that they brought back many of their old rooms as well as adding a massive variety of new scenes. You can consider this a nearly entirely new show in that respect.

Once we got to the front of the line we were greeted by a costumed actor and directed to the rules room which was in front of a large set of industrial elevator doors. We were briefly told the rules while we waited for the doors to open, this only took about a minute.

After a short wait the doors opened, we were greeted by another costumed actor who was going to bring us up to the haunt, only to see a spectacular failure of the elevator and ended up needing to take the stairs. Obviously, this was intentional and there are stairs to traverse for this show. This was a great touch and similar to what they have done in the past in some respects.

When we finally got to the top of the stairs we were thrown right into the chaos and into a familiar scene with jail cell walls, loud music and actors all around. This was an old scene that they brought back into a new show.

As we continued our path through the show we saw that each scene was consistent with their theming and flowed very well.

This crew may not have the most detailed sets in places however they more than make up for it by setting a bar for actors that is difficult to be matched, you can tell that they love their roles and what they do.

We loved seeing how many of the old scenes were brought back into the new show. The Black/demonic Church and rooms hooded figures, disappearing nun and prison cell rooms were old favorites and it was awesome seeing them worked into the new show. The addition of the prison as well as the elementary school were great additions that were not there in years past.

We also saw a great expanded medical ward with a ton of new medical experimentation and mix of great actors who were doing a great job in their roles. While we were lacking our creepy doctor friend from years past, we were not disappointed by the new additions to this portion of the show.

We did traverses between 3 different floors of the building; you will be going up and down stairs and if you are limited in mobility you should be aware of this. It was fun going on to a new floor and basically being out into a whole new world. This was the case in each case when we reached the top of the stairs.

Overall we spent around 23 minutes in this show. This was likely impacted by having someone paired with us whom had limited mobility themselves. This was not so much of an issue for us as we did not run into other groups too quickly, however we did have groups run into us. I think that crowd control for situations like these should be worked on. Having multiple large sets of stairs needs to help control how fast groups move.

The sets were consistent with their theme throughout the show and it was fairly easy to catch on to what they were going for. As I mentioned previously, they make up for lack of detail in some scenes with great actors and an all-around creepy environment.

Actors were on point all night, they were energetic and all over their rooms, we did not hear too much screaming and did get a lot of great dialogue.

Costuming and makeup all looked great and again were consistent with their scenes. You can tell they are continually upping their own game year after year.

Evil intentions is a great show again this year. I fear that it may not be as awesome as years past, but I also see that having to move may have had a deep impact on this because many actors needed new characters and work will continue to be done. I am really excited and curious to see where this new show brings them, they have a ton of new potential to continue to grow and truly fill this new space.

To find out more about this event, visit:
http://eihaunt.com