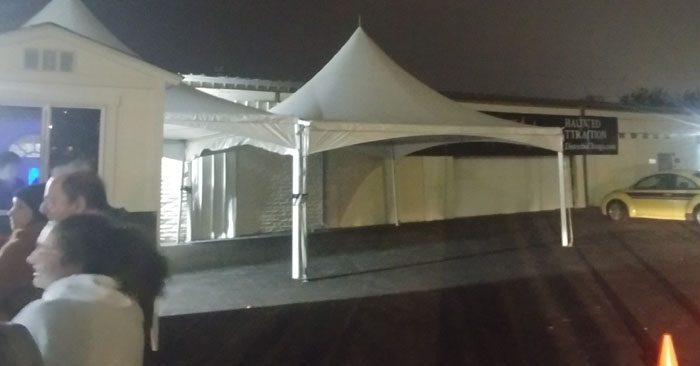 This haunt is NOT at all easy to see from the road. It is in a strip mall that is slightly elevated so people from the street cannot see all the way back where Disturbia is located. There were no signs of any kind indicating where the haunt was, either, only a couple of signs on the haunt building itself. GPS is mandatory here unless you are familiar with the area.

There was one actor with a chainsaw who was working the line outside but no other wait entertainment. As this was opening night this might change.

Disturbia has been around in a couple of previous forms, from a standalone attraction in Bolingbrook to being part of Screams in the Park in Rosemont. This time it was back to being a standalone attraction at a new location in Downers Grove. In the past Distrubia has done an asylum theme, so I was expecting something similar this time, but I was pleasantly surprised to find that they dispensed with that idea. Instead, what was there was a combination of the old Disturbia and Screams in the Park, which was not a bad thing at all. One thing Screams in the Park was notable for was its set design, with elaborate rooms and expansive set pieces, and many of these have been incorporated into Disturbia. From a castle façade to a large crypt, underground rock covered chambers, to voodoo sacrifices, to a cabin in the woods (complete with astroturf), there was a lot to look at inside the haunt.

Additionally, the smaller spaces inside the haunt really helped make the sets look even larger and more detailed. There were nice lighting effects, low ceilings, and many details props inside each area. Thus, those who like set detail should be entertained.

On the acting side, unfortunately, there was little to note. The entire haunt only had about 12-15 actors in it, with almost all of them simply hiding and jumping out at patrons. The sets helped distract from the lack of actors, but for those looking for more intense scares you might not find them here. However, this was opening night, and Disturbia had a rough time trying to open their doors, so it is possible that they will have more actors on future nights.

The only place the haunt started to fall apart a bit was toward the end (perhaps the last two minutes of the haunt). The elaborate sets gave way to simple black walls and empty corridors, ending with a large area of cages with strobe lights, where visitors had to navigate while actors moved amongst them. This area has been a feature of Disturbia since its beginnings, so it was no surprise to see it here as well. One good thing was that the cage maze didn't seem to deliberately move people into dead ends, and we were able to move from beginning to end rather quickly.

Aside from this, though, Disturbia was a pleasant surprise, and an enjoyable experience.


To find out more about this event, visit:
http://www.disturbiachicago.com