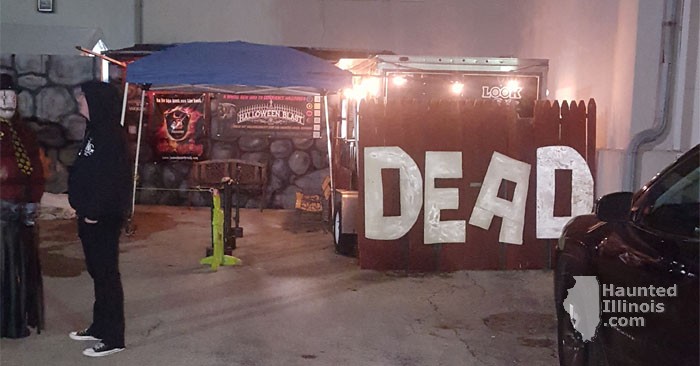 D.E.A.D. Rising is located at 13624 S. Cicero, just north of the McDonalds and behind the Sprint Store. There is a sign, but it is toward the back by the house, and the sign was not lit up.

There were several actors lurking about the waiting line, looking to scare innocent souls. One was a person that had equipment on his boots that, when he scraped them on the ground, caused sparks to fly, which I thought was interesting.

Good, but I believe I was the only person going through the house at that time of the evening.

When I got there, I was the only person in line, so I got in very easily. The first area was set up as satanic church, where the rules were given. After that, you start in a dark maze. This ending up being a very good maze, because I could not figure out how to get out of it for a minute or two. The maze was pitch black, so it was very hard to figure out where to go. There is a second maze towards the end of the house, which I also enjoyed a great deal, but I am more of a fan of dark mazes than most people.

The next several rooms look like the inside of the house, where several actors want you to stick around and be part of the entertainment. I thought this was fun, because, instead of having the actors talking (or yelling) at you, they try to have a conversation with you, and have be a part of the festivities.

Most of the rooms in this place I thought were very well done, but I think they ended up putting their investments more in to darkness and atmosphere, rather than strict detail, which I enjoy more.

The last room ends up being a clown room, where you have two entertaining clowns telling you jokes. The room is set up like a circus, complete with a spinning victim on a bulls-eye. I am guessing the victim was the last person they played games with, and you end up playing a version of "Simon says" with the clowns. The clowns entertain you with jokes, and, I should warn you, the jokes that they tell you are pretty bad.

I had a lot of fun at D.E.A.D. Rising, the rooms became interactive as the actors tried to make you a part of fun, and talk with you, not really at you, so you end up having fun with the actors. Again, I would not call the rooms heavily detailed, but the dark mazes end up making the house pretty scary, and, if you do not know where you are going, it will end up becoming very confusing, especially if you are with a crowd.


To find out more about this event, visit:
http://www.deadrisinghauntedhouse.com/