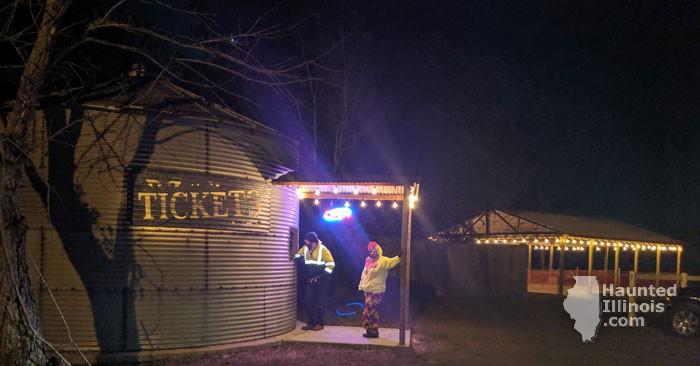 Blood Moon Haunted Scream Park is located out in the country, so the brightly lit property and parking lot stick out quite a bit. GPS led us directly there and the signage, lights, and parking lot attendant helped confirm we were in the right place.

We saw a clown roaming around the ticket booth interacting with people. We did not have to wait very long to get into the show.

We ran into a group about three quarters of the way through, but we were able to space ourselves again by hanging back in between scenes for a few seconds.

After getting our tickets, we were directed to a cue line area and a gate that warned "Abandon hope, all ye who enter here." We were allowed through and found the first building of many. We were impressed to find a building built around a huge tree that was incorporated into the opening scene. We walked through the front door of a house, and then into a bathroom, kitchen, and a bedroom. A little bit further, we found a path covered in jack-o-lanterns and corn stalks, which was very pretty. This is about where we first noticed what looked like a homemade monster with a green glowing mouth, which was impressive.

We found a large cemetery gate and a graveyard scene with massive headstones and what looked like a real coffin. In another building, we found a chapel with an eerie bride, a room with more coffins, and a dining area filled with spiders. We walked outside and got lost in a maze of fences where an actor messed with us and made us question where we were going.

At the entrance of the next building, a clown character with a big smile startled me. We walked through a Christmas scene that we loved, and a butcher shop with a squirming zombie in the cooler. Back outside, we had to find our way through clotheslines and hanging laundry, which was pretty disorienting. We walked into a barn filled with barrels and intense strobe lights. We finally walked outside again and found an outdoor movie screen with a projector pointed on it. We found a very detailed kids' play area and a doll character that creeped us out. Into another building, we found a detailed kids' bedroom with a creepy kid actress. After we walked through a crypt and a foggy swamp, we found ourselves outside again.

We walked through a building that was dedicated to the longest strings of claustrophobic wall panels I had ever seen. Outside of that, we walked through a wooded path that was very reminiscent of the Blair Witch Project. We stumbled upon a young lady who had no eyes, and she warned us that her mother would take our eyes, too. We eventually found said mother, who was very eerie to walk by.

The last few minutes of the show were impressive. The paths were filled with wrecked cars and broken tower pieces. We ran into a couple actors here and everything seemed pretty quiet for the most part. This is about where the chainsaw wielding maniac found us and followed us into a building with very pretty house scene which housed a tall staircase. We walked through a disorienting spinning tunnel, and finally found the exit.

I wasn't totally sure what to expect here, but I was pleasantly surprised. The scenes were very pretty and some of the props were, in fact, handmade by the haunt team. I have a lot of respect for haunters that build their own props and effects, and I was impressed to see how much was uniquely crafted for their own show. The actors were always ready for the next group to walk through, and everyone seemed enthusiastic about their roles. It is my understanding that the event is fairly new, and I was impressed to see how much they had accomplished so far. I am very much looking forward to seeing where they take this show in the future.


To find out more about this event, visit:
https://www.facebook.com/Bloodmoonhauntedhouse/