2019 Basement Of The Dead Review 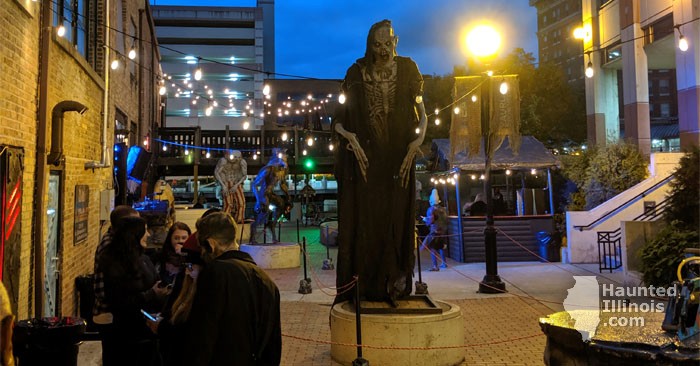 The downtown Aurora area can be a bit confusing for those who aren't familiar; the Hollywood Casino dominates the landscape, sitting right on the river on a grid of tightly knit streets and bridges. Google Maps (or any good GPS app) will definitely help if you've never visited Basement of the Dead before. The attraction is located literally in the basement of a building that also sports a number of other businesses (accessible by the river boardwalk or the sidewalk on the other side of the building- do not attempt to reach the attraction through the other businesses), and parking is a free-for-all of street spots and public lots dotting the downtown area. Also because of the casino, traffic can be bothersome. Keep your eye out for costumed actors and the large Death Rides statue for the entrance.

Costumed actors chasing squealing women, extreme performance artists (like the fire and glass eater who seemed to attach himself to me), outdoor concessions, a costumed DJ pumping tunes, you name it, Basement of the Dead has it. You will not be bored waiting for your turn.

Free parking located around the area, but no specific lot

We were fortunate enough to arrive right before the attraction opened, giving us first place in line. Our wait was barely ten minutes, but be prepared for longer lines later in the evening. This is a very popular event in a very populated area. We were given the general rules by a costumed actor outside the doors, then allowed inside in a small group of four to fend for ourselves (be advised this attraction is not wheelchair accessible). Basement of the Dead has two separate Haunts, one leading to the other (both are included in the ticket price). The first is longer, taking us 12.5 minutes from start to finish. The second includes 3D effect glasses and a black-light flash light (given to each visitor by a costumed actor) took 6.5 minutes.

We were the first people in the attraction for the evening, so our movement was completely unimpeded. We lost the second half of our group simply because we moved faster. Actors did not hold us up for crowd control purposes except at the front of the second Haunt line to give us our needed props.

If you're in search of intense experiences near the west burbs, this is the one for you. Without spoilers, know that the creators of Basement of the Dead are thoroughly committed to overloading the senses of every guest that comes through their doors. The actors dedication to character was as thorough as their special effects make-up and extremely detailed costumes. The props were top notch, and expertly placed for a disturbing sense of realism that scratched at the Uncanny Valley of human consciousness. What do I mean by that? Imagine a two story room full of indescribably mutilated or demonic nuns, and being forced to walk insanely close to every single one of them, and not knowing which are dummies and which will suddenly scream in your ear. And that's just one room. There were plenty of strobes and blind corners to keep you disoriented, and air-guns, fog horns, and impossibly loud sound effects coming from every direction. If you're sensitive to noise or light induced headaches, maybe skip this one. Or bring ear-plugs.

Whereas the first part of Basement was a hodgepodge of general horror themes (demonic, chainsaw massacre, insane asylum, murderous swamp dwellers, ect), the second haunt is exclusively Clown related (be warned). It's also experienced through 3D glasses and a black light flashlight, which produced the strongest, most trippy 3D effects I've ever seen and left me mildly dizzy for about half an hour afterward (also be warned). The props and effects with the reactive paint overlay alone were amazing to gawk at, on top of all the insane circus folk inside, but I would not recommend this haunt if you have equilibrium issues (or in any way chemically impaired- save the drinking for afterward).


To find out more about this event, visit:
https://basementofthedead.com