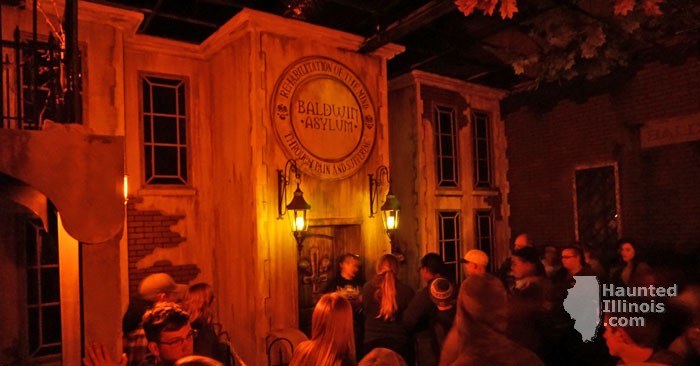 Baldwin Asylum could be hard to see, if you aren't looking carefully. The building the attraction is in sits off quite a distance from the road. There was an illuminated black "Baldwin Asylum" banner on the front of the building, but it is hard to see until you get closer to the building. My GPS did take me right to the location, though.

This was improved with a massive towering façade in the indoor waiting room, to help establish the proper mood for customers waiting in line. In the queue line area, I observed a couple of actors entertaining the crowd.

Free. There was ample parking.

They did good in this category. I didn't see any other groups as I walked through the haunted house.

Baldwin Asylum set the mood very well before customers entered the attraction with the towering façade in their queue line area.

That atmosphere continued through a wide variety of scenes. While walking through Baldwin Asylum, I encountered medical areas, a toxic waste accident, disgusting bathroom, electrocution and more. Various transitions between scenes were used, including dark hallways, a pathway of surgical tubing you had to push through, a hallway of twitching body bags and a lane of hanging drainage tubes.

In one area, there was a visually striking swamp effect, created with green lasers. Don't let your guard down in this scene, as there were a couple of surprise scares. The toxic waste accident featured glowing 55 gallon drums with toxic waste leaking from them. In addition to the barrels, there was a surprise effect that really took me off guard. In the tool shed, there were walls made of weathered wooden planks, with various tools hanging on hooks. The actor in the scene, who was very convincing, asked me if I would like to stay for dinner. There was also a disgusting bathroom with grungy tile walls. The walls were smeared with blood or feces; I really couldn't tell. I also enjoyed the electrocution scene. It featured three electric chairs lined up in a row. After the electrocution started, there was a surprise scare that I didn't see coming.

In other areas there was a medical scene with a body on a table, a bloody curtain maze, a vinyl tarp maze, a backwoods shack, an autopsy (I think), and a creepy church with low-hanging fog and shrieking nuns.

Baldwin Asylum used a number of methods to mess with you. There were a few attacks from above, which really kept me on my toes. The vibrating floor was a big surprise and some pathways required customers to duck down, to get through.

The final scene was phenomenal. I don't want to give anything away, but there is a larger than life scare that really would mess with people who have claustrophobia!

In the past, Baldwin Asylum has been known for its detailed scenes. From what I could see this year, that still appeared to be the case; however the low light levels in many areas interfered with my ability to discern the level of detail. In a few scenes it was even difficult to see what was going on. While dark areas help give actors more places to hide, I'm not sure the tradeoff was worth it. In a medical scene one actor said to me "Don't let her (the doctor) see you. You'll end up looking like me!" I turned around and my first thought was "Is that good or bad? It's so dark in here that I can't even see what you look like."

As for actor performance, they did a great job. Most of the actors seemed eager to scare, with a very aggressive and in your face acting style. Many of them growled at you menacingly, while others used interactive one-liners that were unique to each character. All of the actors I encountered stayed in character; however, in one scene I did witness a staff member standing out in the middle of the scene, coaching an actor on how to handle groups of customers. That was a bit disappointing and killed the mood for the upcoming scenes. It is unfortunate that this guidance couldn't have been given prior to showtime.


Overall, Baldwin Asylum did a great job this year. Regardless of any aforementioned issues, they still put on an entertaining show, so be sure to add this attraction to your list of haunt visits this year!


To find out more about this event, visit:
http://slayervilleproductions.com