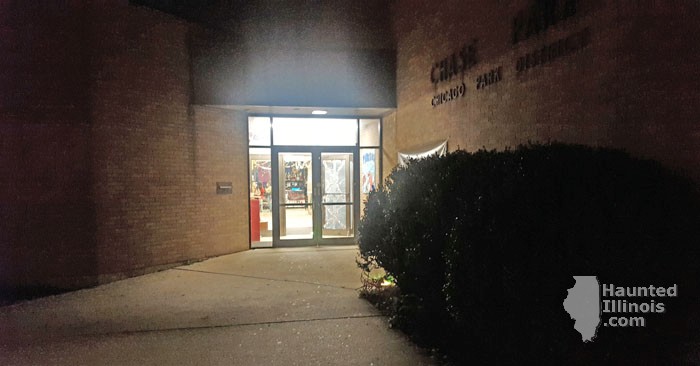 The Park After Dark is located at Chase Park, on Ashland just south of Lawrence. There is a big sign on the corner of Leland and Ashland. The main entrance is where to go in this year, and go up the stairs,

There wasn't any wait entertainment on the night that I attended.

$10.00. You have to buy the tickets online, they do not take cash at the door. They have a bar code to scan at the door if you want to buy tickets, but all transactions are online.

Smooth. I was in the first group.

I am not going to lie, I had reservations going to this haunt. I went last year, and, although it had some good points, it was not a great house. I will say that they definitely improved the house over last year.

The house itself is on the second floor of Chase Park, and I think that helped both improve the space and size of the rooms, as well as expand on some good ideas. There are several dark mazes that are really well done, as well as having people hiding in the dark waiting to pop out at you.

Most, if not all, of the actors are teens or younger, and it helps give off a creepy vibe. While some of the actors did their usual screaming at you, some just sat in corners and stared at you, which I found especially eerie. Maybe they were supposed to scream at you, but either chose not to, or were told not to, and that helps give those rooms a spooky vibe.

The Attic was definitely an improvement over last year's Park in the Dark in the same location, and most of the actors in there were children, but don't let that deter you from going to this house. They still had some pretty good effects, and some good scares.


To find out more about this event, visit:
https://www.desolateentertainment.com/