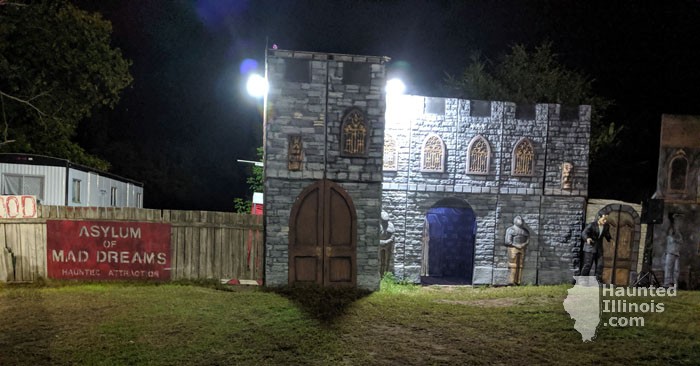 Asylum of Mad Dreams is located at the Cordova International Raceway, which runs parallel to Route 84. There are a lot of entrances into the raceway, but there is a huge lit sign at the entrance that leads to the haunted house. There was a long path that led to the parking lot, which was brightly lit and had signs for where to go.

I arrived pretty late at night, so I didn't wait long to be admitted into the show. I saw fire pits and bonfires to keep people warm while waiting. I saw a couple of clowns roaming through the crowds, and there was music playing in the waiting area that I could have happily listened to all night.

I was sent into the haunt with two other people, and we did not run into any groups. Eventually, there was an area in the show that collected a large amount of patrons for a full bus ride. When we unloaded the bus, all of the groups were split apart again in a clever way. This haunt did a good job keeping groups separated.

The haunted house has a massive gothic façade, and a clown was standing outside of the entrance calling group numbers to be let in. When it was our turn, we walked into a front parlor scene and we were directed to an elevator to begin our tour. The elevator ride was nerve wracking and the visual effects were pretty impressive. When the elevator stopped, we reached the basement. From there, we walked through a wide variety of classic haunted house scenes. One of my favorites was the room with the very well hidden exit.

We found ourselves outside and on a path that lined some impressive building facades; some of which we walked in and out of. A portion of their outdoor area is very dark, but we were given a little handheld light to help us through. That was an eerie experience. At one point, we were given 3D glasses and we were sent into their 3D area.

One of the most impressive and memorable portions of this event was the zombie outbreak area. We found ourselves in a massive outdoor scene that totally took me by surprise. We were in between very tall industrial buildings, and it was clear that things had gone awry here. We eventually found a character who was armed and welcoming people into a safe zone. This character was an absolute riot. We were told to line up against the wall, and here, we waited until we had a huge room full of people. Then, the bus pulled up to take us to safety.

We loaded the bus and I immediately noticed that the windows on the sides and the back of the bus were completely covered. This bus took us on a ride that legitimately had me freaked out. We were going over bumps, down hills, making sharp turns, and hitting tree branches as we sped by. The only view that we had of the outside was through the front window, and we couldn't see anything except for the bus jumping up and down. Seriously, this bus ride was petrifying.

When the bus let us out into the safe zone, my group was reestablished and put into a holding cell for a few minutes. A nurse finally opened the door and verified that we had not been bit or infected, and we were allowed to proceed. From there, a nun directed us through a lab, we walked through a few more scenes, and we eventually found the exit.

This was my first visit to Asylum of Mad Dreams and I was pleasantly surprised. I experienced way more than I expected to. The different buildings and trails were both impressive. The bus ride was absolutely nerve wracking. I was tempted to go back the next day to experience it again, but inclement weather didn't cooperate. I am already looking forward to my next visit there to see what else they come up with.


To find out more about this event, visit:
http://aomdhaunt.com