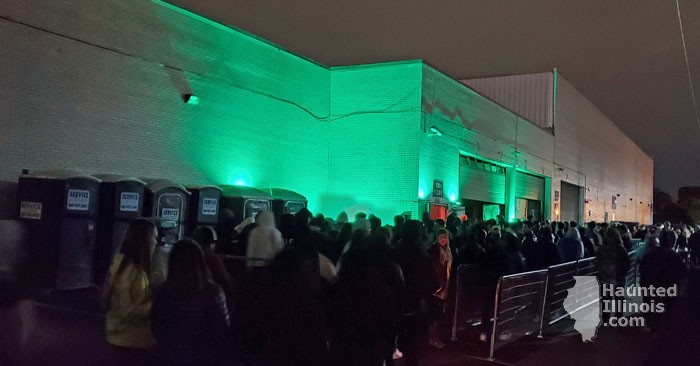 Nestled in an industrial and commercial location, using your GPS it's fairly easy to find. When you arrive there is a lit up sign over the actual entrance found behind the fencing with scrim. Depending on your angle you might be able to see it. The outside queue line is the dead giveaway. Here you will also see staff members out in the entrances and exits with parking wands to help direct pedestrians.

On a busier night you will see line actors outside interacting with those waiting to get in.
You may actually have to pass the location to find parking in the area, there is no parking directly connected to the attraction.

At this location there are almost three different type of queue lines.

One outside. Before you enter the building, you must pass a security check complete with metal detector, so please leave unnecessary metal items in your car. There are very entertaining and talkative clowns interacting with guests, and random props they may have "found" around the property.

One inside is medium / large (depending on how busy it can get,) which is the main area. They have actors roaming in between guests grabbing their scares as they come, again it seemed to be mostly clowns. They have a projection on a screen with Halloween / horror trivia which is nice way to keep your mind busy and learn new facts you may have not known. This will take you into a photo op room if you purchased the Fast Pass or Skip the Line option.

The last queue line is much smaller. After your photo was taken (FP / STL only), you are sent into manageable groups to enter the maze.

Into the second maze there is no wait entertainment.

Depending on when you visit the prices can vary. There are two attractions listed on their website for the admission cost, Creature Feature and Other Side.

Now, like most haunts there is an up charge for Fast Pass add $10 (reduced wait) and Skip the Line add $20 (immediate entry)

Please keep in mind that the prices listed above are just "base prices". Various taxes and fees are applied to these base prices, which may jack your ticket price up several dollars per ticket.

Parking is free at a local strip mall found about a block / block and a half away. There is a second option using an independent parking company which charges $5 but is also directly across the street and monitored.

With both haunts there didn't seem to be any method in place for actors to break up groups or control the flow if things got a bit out of hand. Our group was at a little of a slower pace, but with one group catching up to us, It did not seem like this was an outrageous number of people. They didn't have your traditional jump or pop up scare. But more of bringing you into the storyline.

The evening we went they seemed to be a little short staffed. We would walk through the maze and for a few minutes at a time we would not see any actors in several consecutive rooms.

Creature Feature- As soon as you walk in your are punched in the face with a huge and wildly detailed set design, something like an old courtyard of a small mountain or hilly village. You are immediately met with some townsfolk informing you of the Werewolf's curse. As you traverse the streets and alleyways you come across a few more townsfolk, some of which are showing signs of an unknown madness. As we would continue on our journey, the impressive sets almost gave you the feeling you were transported somewhere else. Many of the facades could seem to reach the boundaries of fifteen to twenty feet in height, giving us a feel we indeed where somewhere else, a small fictional town perhaps. I don't quite know if I had missed any other details or parts of the story at eye level.

I was quite enjoying the scenery looking around. They were also able to give the feeling of depth. Each scene was well thought out with detailed background, midground and foreground sets which gave you a bit of a sensory overload. We would continue to walk without meeting others (actors) for quite a bit of time. Until we arrived and entered a mansion, here in the vestibule a woman warned us of the vampire. The grand staircase and decor of the room once again gave you a feeling of being somewhere else. I had expected some scares to happen more in the catacombs as we traveled but as with the small town prior some of it seemed flat with no actors or animatronics to give you a fright.

This and the following maze seemed to rely more on it's actors, mostly with face painted makeup. No masks or detailed special effects makeup. Many areas I would expect a prop to come out with lighting or a sound effect to accompany it but no dice. Both surprising and a bit of a letdown at the same time. I give 13th Floor mad props for keeping their scares with the actors instead of machinery to replace the flesh and blood actor, but it would have been a welcome option if they had more actors. It was very 'Disneyesque' in design, allowing your mind to believe the objects it was seeing. The double layered laser swamp was also a warm and welcome touch to keep you guessing.

Other Side- This started off with a very well designed white out room, which was super effective. As you started to walk through this maze my first impressions were you were experiencing a futuristic hospital or a type of test lab. Now at first, I didn't realize the theme for the second half, as I looked at the wall behind everybody and saw a title what I thought was the name, but that was misleading and maybe that was what it was called in previous years. It was not until I looked online which seemed like a loosely veiled knock off of "Stranger Things". But what I was reading out of it was more of a rampant virus, maybe drastically changing the DNA of other people at an alarming rate.

As we are walking through we are experiencing rooms that seemed out of place for the theme unless we were here venturing a town. They had scenes mimicking an urban alley, casino, and a boiler room. All of which had an actor in it for scare purposes. The one I liked the best was the basement, maybe a torture room in a traditional hospital. Most actors had special effects makeup or a dimensional face paint. The rooms, even though they had a much lower (and standard) ceiling, were detailed to the fullest. This time there seemed to be a few more actors, which made the experience somewhat better.

The chainsaw run was just a plain corridor, which I can understand that liability may be an issue if decorated with obstacles, but I expected more than plain black walls and more like painted to tie into the theme. Especially with all the details as you walk through this attraction. This leads you right into their gift shop. It's filled with plenty of licensed merch in case you want to bring home something. I also felt the area was too narrow to accommodate both shoppers browsing and guests leaving toward the exit.

To find out more about this event, visit:
http://www.13thfloorchicago.com/