The Ghost of Mary Hawkins 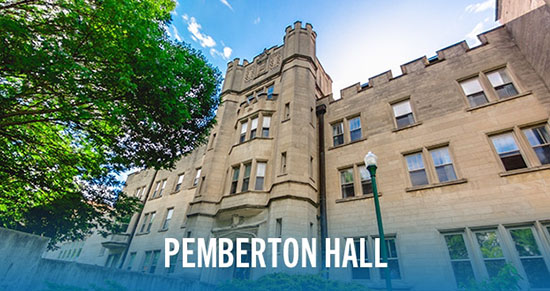 The most famous school spirit in Illinois is undoubtedly the phantom who haunts the women's dorm known as Pemberton Hall at Eastern Illinois University in Charleston. This building has a long and rich history that is filled with tradition... and tales of ghosts.

The gothic towers of Pemberton Hall loom high above the EIU campus.

The abandoned music room on the hall's fourth floor, where one student met a tragic end.

Pemberton Hall, or "Pem" as it is sometimes referred to by its residents, was the first college building in Illinois to provide housing for women on campus. It may also be the first such building to become haunted. The past decades have provided literally hundreds of tales of strange events, ghostly apparitions, and frightening tales about the dorm. For more than 80 years, women living in the hall claim to have encountered the ghost, or ghosts, here and have reported her playing the piano and scratching on the walls of the building's abandoned fourth floor.

But how did the tale begin? As with every chilling tale, it started with a series of terrifying events. In this case, they took place on a cold winter's night around 1917....

It was a bitterly cold night in January and one of the residents of Pemberton Hall went upstairs to the fourth floor of the building to play the piano. It was very late but the young woman had been unable to sleep. She hoped that some soft music might ease her mind and help her to relax.

The story goes that a janitor who worked on campus somehow managed to gain access to the women's hall that night. The janitor cautiously made his way through the dark building to the upper floor. Here, he found his victim with her back turned to the open doorway. He grabbed her savagely and pummeled her with his fists. Then, tearing and pulling, he tore away her nightgown and attacked her, raping her, beating her and then leaving her for dead. Soon after, he made his escape and vanished into the cold winter's night.

The young woman, however, was not dead. She managed to drag herself to the stairs, leaving a bloody trail in her wake, and crawled down the steps. She pulled her battered body along the hallways, feebly scratching on doors and trying to awaken someone to help her. Finally, she made it to a counselor's door and managed to rouse her from her sleep. When the counselor came to the door, she found the young woman in a pool of blood, her body bruised, torn and now lifeless.

As the years have passed, residents of Pemberton Hall say they have heard this event from the past repeating itself in the building. They recall the dragging sounds heard near the stairs that lead to the upper floor and the sounds of scratching on doors and walls. Most disconcerting though are the bloody footprints that have appeared in the corridor, only to vanish moments later. Many believe the ghost of the murdered young woman has returned to haunt Pemberton Hall. But if she has, she does not walk in this building alone!

The counselor who discovered the murdered girl was named Mary Hawkins. She was a young woman herself, barely older than the ladies she had been hired to assist were. She was a very attractive woman with long, blond hair and a bright disposition that quickly made her a favorite among the residents of Pemberton Hall. However, the effect of the murder on Mary's personality was devastating. She became haunted by the death of the young woman and students spoke of seeing her pacing the hallways at all hours of the night, unable to sleep and tormented by horrible visions and guilt. Finally, unable to cope with her depression, and the nightmares that accompanied it, Mary was institutionalized and later committed suicide.

Shortly after her death, the residents of Pemberton Hall started to report some rather strange occurrences in the building, and these spooky events continue today. They believe the incidents can be explained as the ghost of Mary Hawkins, still making her rounds and checking in on the young women who live in the building. Perhaps her spirit is unable to rest after losing one of the women in her care and she still roams the hall, watching out for them and protecting them from harm. Her ghost is said to glide through the rooms, locking and unlocking doors, turning off radios and televisions and generally keeping track of things that go on here.

For many years, students have spoken of the odd happenings in the building and events that would convince even the most skeptical of residents that perhaps the hall was truly haunted. On many occasions, students that I have spoke with have told me of late night door knocking and inexplicable sounds in the hallways. Once the door is opened to see who might be there, the hallway is discovered to be empty. Others claim to have seen the apparition of a woman entering their rooms and then vanishing. Some have seen her leave, closing and locking the door behind her. In other cases, residents who distinctly recall leaving their doors open, often find them to be mysteriously locked the next morning. It was as if someone was checking up on them and was worried about their safety. Could it have been Mary Hawkins?

And these are recent accounts that I have heard first-hand from some of the former residents... the original stories date back even further than this!

According to one former resident, there was a string of strange incidents in the fall of 1952 when she was living in the dorm. She explained that the girls were being awakened at all hours of the night by banging on the doors and from knocks that seemed to be coming from inside of the walls. No cause was ever determined for the incidents, but most just assumed that it was Mary, trying to make her presence known.

Throughout the 1960's and 1970's, residents reported hearing the sounds of whispers in the building, especially on the fourth floor, and there were a number of reports of apparitions on the stairwell. These figures appeared very briefly and then vanished. One student, who lived in Pemberton Hall in 1976, recalled the problems that the resident advisors had with the furniture in one of the lounges. It seemed that all of the furniture in this room was often found to be overturned or at the very least, rearranged. It would often happen during the overnight hours, but sometimes it happened much faster than that.... and was cleaned up instead of moved about! Apparently, an RA walked into the room one morning and discovered the furniture had all been moved around. She went to get some help to straighten the room up again and when she and another resident came back, they found everything had been restored to order! After that, the RA always just left the room the way she found it and yet somehow, it would later be cleaned up again. The students on the floor all denied knowing how this continued to take place.

Most students don't actually see Mary, or the other ghosts, but few doubt the spirit exists. Many have had their own odd encounters, even without the benefit of actually seeing anything. My wife, Amy Taylor, is an alumnus of Eastern Illinois University and lived in Pemberton Hall for several years. She has recounted many stories about Mary Hawkins and the strange activity here. While she never came face to face with Mary Hawkins, she did have a few disconcerting experiences. One recurring incident involved the lights on the fourth of the building, where the music room is located and where the attack on the young woman took place many years ago. Even though this floor is now locked and off-limits to residents, many of the students reported seeing the windows open and close and the lights turn on and off. There was never any logical explanation for why this might be taking place.

In addition, Amy tells of another unexplained incident that took place one morning after she and a number of other residents left a communal shower room. When they closed the door behind them, they were sure that all of the curtains to the individual showers had been closed. When they entered the hallway, they heard a loud sound like something monstrous was sliding across the floor of the empty room behind them. They ran back in to find that all of the shower curtains were now open and a heavy wooden chair had somehow traveled across the room under its own power. It was now sitting directly in front of the door! No one else had entered or had left the room since Amy and the others had departed.

In recent years, the majority of weird reports have centered on the fourth floor. Even though no one ever goes up there, this has not stopped residents from reporting the sound of footsteps pacing overhead and the strains of faint piano music filtering down from the upper floor. The floor remains darkened and closed off and is empty save for old furniture and the dust of decades. It has been abandoned by students and visitors alike, although there is still a piano stored in the music room. Is this where the music comes from? If so, one has to wonder is the music that comes from it these days is of our world or the next......?

Pemberton Hall is located on the Eastern Illinois University Campus in Charleston, Illinois, which is located in the southeast part of Central Illinois.