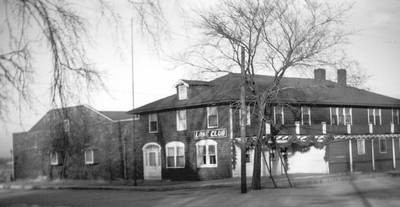 The LAKE CLUB opened as a nightclub in 1940 but the building on Fox Bridge Road had seen many incarnations in the years prior to that, including as several restaurants and even a skating rink called the Joy Inn. In 1940, two dance promoters named Harold Henderson and Hugo Giovagnoli renovated the place and opened it for business.

The club soon became one of the hottest night spots in Illinois, drawing customers from all over the state. It boasted a raised dance floor and the owners concentrated on bringing big name entertainment to the club and succeeded. Among the many top performers were Bob Hope, Ella Fitzgerald, Guy Lombardo, Pearl Bailey, Spike Jones, Nelson Eddy, Woody Herman, Mickey Rooney and many others. The constant stream of entertainers and big bands brought capacity crowds to the club every night.

The Lake Club thrived for nearly two decades, becoming known not only for its swinging entertainment, but for its first-rate gambling as well! Wealthy customers and the society elite of Springfield and Decatur frequented the club for the musical guests.... and for the billiard tables, craps and gaming tables, slot machines and card games also. This part of the club operated in secret in a back part of the building, known only to high rollers and special customers.

However in December 1958, the golden days of the Lake Club came to an end. The partners had survived many setbacks over the years, from lawsuits to foreclosures, but the club would not survive the two undercover detectives who gained access to the gambling rooms that Christmas season. 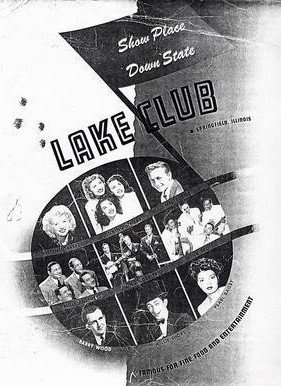 
The club was immediately shut down, although patrons continued dining and dancing while the actual raid was going on. The two state troopers who entered the gambling rooms were the first police officers to arrive, but many more followed. Newspaper accounts reported the police confiscated all sorts of gambling equipment including tables, dice, slot machines and large quantities of cash. The billiard tables were so large they had to be dismantled to get them out of the room.

Business began to falter in the wake of the raid and finally closed down in the 1960's but despite his partner, Harold Henderson, passing away in 1977, Giovagnoli managed to open the club again in the 1970's with other parties managing different projects in the building. During this next popular time in the club's history, it was managed by Bill Carmean and Tom Blasko as a rock club. In 1980, it was leased by Pat Tavine, who also operated it as a rock club until 1988, when it closed down for good.

It was in August 1979 that the Lake Club, known in 1980 when the story came out as the Sober Duck Rock and Disco Club, gained national notoriety. It was at this time when the ghost of Albert "Rudy" Cranor was finally put to rest.

According to the many patrons and staff members who had experiences there, the haunting of the Lake Club first began in 1974. At the time, the club was in the midst of a revival in interest and the business was under the ownership of Tom Blasko and Bill Carmean, two Springfield men who were booking rock acts into the club. The building itself was still owned by Hugo Giovagnoli and Harold Henderson.

Bill Carmean was the first to notice that something strange was going on at the club. Both he and Tom Blasko had experienced some cold chills in the building, along with hearing odd sounds and getting the feeling of being watched in certain rooms. One afternoon, he came into the club and sat down at the bar with the lights off. Suddenly, he heard the sound of a piano being played in another room. He got up from his seat and walked in to see who was playing so badly. As he stepped into the room, the piano stopped playing... because the room was empty.

Weird things continued to happen. Often on Monday nights, while Carmean would be in the building going over the weekend receipts, he would hear a door near the office open and then footsteps crossing the floor. He would jump from his seat to see who was there, but the hallway was always empty. Carmean also remembered a salesman visiting his office one evening when a glass flew off a table and hit the wall on the opposite side of the room. The salesman left in a hurry.

By 1976, the haunting had intensified and things began happening more often, and in front of more witnesses. A club bartender was pouring a drink one night when the glass in front of him suddenly shot up into the air and landed over his shoulder. A waitress also experienced the antics of the ghost one night when she went to serve a drink to a customer, only to find the glass inexplicably filled with chocolate! She would later insist the glass had been absolutely clean when she handed it to the bartender.

Carmean was also the first of the club's staff to guess the identity of the ghost who was plaguing the club. He recalled that a former employee had committed suicide in the building several years before. On a lark, he started calling the ghost by this man's name... Rudy.

Albert "Rudy" Cranor had worked at the Lake Club during its heyday of the 1950's. He was also a very large man, well over 250 pounds, and he had snow-white hair. After the club fell on hard times following the gambling raid, Rudy also began experiencing some personal difficulties. He was a very private person, so no one really knew what was going on, but they did notice that he began to drink heavily while on the job. They also began to notice some changes in his personality and appearance. He seemed to be more tired than usual and dark circles had begun to appear under his eyes. Then one night he took sick and had to be rushed to the hospital. It took several men to carry him downstairs to the ambulance. He returned to the club after a two-week stay in the hospital, but he was never the same again.

On June 27, 1968, Rudy committed suicide with a high-powered rifle in one of the back rooms at the club. No one was ever sure why Rudy had killed himself, but regardless, he wouldn't stay gone for long. In a few short years, he would return to haunt his beloved club.

The strange events at the club continued in the form of weird antics and pranks, apparently carried out by the ghost of Rudy Cranor. One night, Tom Blasko placed a pile of tablecloths on an empty table and left the room. When he came back, the cloths were on the floor. He picked them up and left again, only to return moments later and find them once again on the floor. This was repeated several times until Blasko finally left them on the floor.

Employees and visiting musicians also reported strange occurrences like doors opening and closing by themselves; the sound of footsteps in empty rooms; a drink that lifted off a table and then dumped in a customer's lap; office equipment that operated on its own; feelings of being poked and prodded by unseen hands; and numerous other bizarre happenings.

A frightening event took place in the summer of 1979 when Barbara Lard, a waitress at the club, had an encounter with Rudy himself. She was working one evening and went to the bathroom behind the back office. As she came out, she glanced over the back bar and saw as just a head, hanging there in space, and although she could see through it, the head appeared life-like. She said that this apparition had snow-white hair... and she had never known, heard about, or had even seen a photograph of, the late bartender, Rudy Cranor. The apparition looked at her for a moment and then spoke, telling the waitress that one of the owners of the club was going to die. This was not a threat, Lard recalled later, but merely a warning.

Needless to say, Blasko and Carmean were more than a little unnerved by the ghost's warning. Then, two weeks after the incident, Harold Henderson, one of the original owners of the club, died at the age of 69. He was still the owner of the building itself and was an owner that Rudy would have known during his lifetime.

This incident would shake Blasko more than anyone else. He had spent two weeks living in fear for his life and he felt that it was time to get rid of the ghost if possible. Blasko was a practicing Catholic, but when he contacted his parish priest, the man declined to become involved.

Finally, in August 1979, Blasko attended a high school class reunion and ran into one of his former classmates, Reverend Gary Dilley, a priest who now lived in Fort Worth, Texas. Tom mentioned the problems at the club to Father Dilley and the priest was intrigued. After some discussion, he agreed to come out to the club and take a look around.

After arriving at the club, Father Dilley also sensed something out of the ordinary there. He also experienced some unexplained cold chills and felt as if someone was watching him. "I also had the feeling that someone was trying to communicate with me," he said in a later interview.

The priest then questioned several of the club's employees and found that their stories were very similar and he knew they had not had time to compare notes before he spoke with them. He was convinced that something was going on, but he declined to do an "exorcism" of the club. To do that, the case would require a thorough investigation and permission from the local bishop, which he doubted that he would get. Instead, he decided to bless the place and pray there, hoping this would perhaps put Rudy to rest. Father Dilley contacted two other priests to take part in the ceremony. The three priests went from room to room in the club, blessing each with holy water and praying. They asked that any negative spirits depart from the building and they prayed specifically for Rudy Cranor. They entered the room in which he had committed suicide and prayed that his spirit be at rest.

So, was that the end of the haunting? Apparently, it was. The day of the religious ceremony was the last day when anyone was aware of Rudy's presence in the building. Once Rudy was gone, some staff members realized they hadn't minded his ghost as much as they had once thought. "In a way, I sorta miss Rudy," Tom Blasko said in a 1980 newspaper interview. "We were all fond of him. It's been pretty quiet since the priests were here... sometimes I wish that I hadn't asked them to come."

Whether he was missed or not, Rudy had finally found some peace.

THE LAKE CLUB had been located at 2840 Fox Bridge Road in Springfield, but burned to the ground on a Sunday morning of August 1992. It had been closed down since 1988 and was in poor condition. At had been totally abandoned for more than three years at the time of the fire and investigators believed that it had been purposely burned down.