The History & Hauntings of Southern Illinois 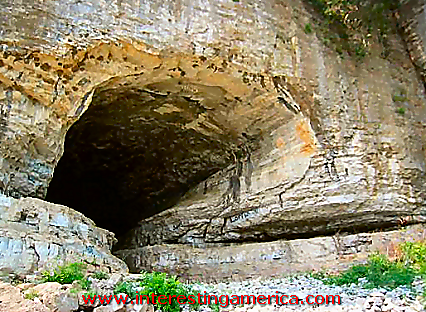 View of Cave-In-Rock - Courtesy of InterestingAmerica.com. Photo By Phil Dotree.

The rivers and waterways of southern Illinois have always played a dominant role in its history and folklore. The early settlers, like the French, established themselves along the rivers and later, farmers would come to realize how much more simple it was to use the river to transport grain to market. The era of the steamboat created towns like Chester, Elizabethtown, Cairo, Metropolis, Golconda and Shawneetown. These towns became shipping ports with flour and lumber mills and even an iron foundry in Grand Tower. Travelers came to the towns by boat and hotels and establishments on the riverfront flourished.

Many stories have emerged from the rivers and the towns surrounding them, of wrecks, lawlessness, pirates and even ghosts. Perhaps the most famous pirate location on the river was an outlaw hideout called Cave-in-Rock, which is located along the Ohio River at the southeastern edge of the state. The cave became the stronghold of pirates who plundered flatboats on the river and who murdered and robbed travelers. It was also here, around 1800, that a robber named Samuel Mason began operating a tavern and gambling parlor in the cave. He used whiskery, cards and prostitutes to lure travelers in off the river and many of these customers found themselves beaten, robbed and sometimes dead, after tying up at the crude wharf.

Cave-in-Rock, located close to the town of the same name, was a perfect place for criminal enterprises along the river. At that time, it boasted a partially concealed entrance and a wide view up and down the river. The cave is about one hundred feet deep, with a level floor and a vertical chimney that ascends to the bluff above.

Samuel Mason operated here for several years. He was said to be a man of gigantic size and possessing no conscience, he killed for both pleasure and profit. He also operated along the Mississippi River and on the fabled Natchez Trace, a series of trails in the south that became known as a haven for thieves and pirates. Eventually a reward was offered for Mason, $1000 dead or alive, and a hatchet was put into his back by one of his own men. This traitorous wretch never collected the reward though as he was in turn killed by other members of the gang. Mason's cronies eventually scattered to the wind and other outlaws took their place at Cave-In-Rock.

The pirates were also said to have preyed upon ferryboat passengers at Ford's Ferry, a few miles upriver. The ferryman himself, James Ford, was said to have been in league with the pirates. He was also said to be one of the "slave catchers" in the employ of John Hart Crenshaw. Ford eventually came under attack by the vigilante "Regulators" and this would lead to his demise. One night, in 1834, he was having dinner at the home of a Mrs. Vincent Simpson, the widow of one of Ford's men. He was eating his food at the table and someone brought him a candle and asked that he read a letter aloud for him. Using the candle as a signal, the "Regulators" outside opened fire, aiming between the logs of the cabin. Ford died with 17 bullets in his body!

For years after his death, the slaves told stories about how Jim Ford had died and "landed in Hell head first". At his funeral, attended only by his widow, a few family members, neighbors and some slaves, a terrible thunderstorm came up. Just as Ford's coffin was being lowered into the ground, lightning flashed and a deafening clap of thunder filled the air, causing one of the slaves to loose his grip on the rope holding the coffin. The box dropped into the grave head first and wedged there at a strange angle. The heavy rain that began to fall made it impossible to move the casket, so it was covered over the way that it had fallen. This left Ford to spend eternity standing on his head.

Ford's death would not bring an end to the thievery at Cave-in-Rock. Many of the remaining pirates continued to prey on travelers from the sanctuary of the cave, while others joined with villains like John Murrell and his "Mystic Band". Murrell was a "slave catcher", thief and murderer, who killed his first man when he was only sixteen. He later died after serving time in prison.

By the late 1830's, most of the outlaws, pirates and counterfeiters were driven away from Cave-in-Rock and the bloody past of the place began to fade with time. As years passed, the cave became more of a recreation area than a den of thieves and remains a natural attraction in southern Illinois today. The legends have never died completely though and many still remember the area's blood-soaked past... and the stories of ghosts. In years gone by, travelers passing on the river often claimed to hear the keening moans of the dead echoing out from the mouth of the cave. These same cries are still sometimes reported today. Do these eerie voices belong to the crime victims of long ago, who were lured to their death at Cave-in-Rock? That answer remains as mysterious as the history of the cave itself.