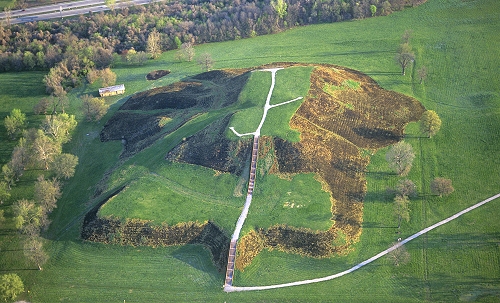 Picture courtesy of The History Hub

While the record of European explorers in Illinois begins with the arrival of Marquette and Joliet in 1673, the chronicle of the Native American inhabitants dates back much further. This far earlier story, still only partially disclosed, reaches back into a dim and mysterious past. Scattered across the region are the relics of a dead and vanished civilization. They have been called the Mound Builders, thanks to the vast monuments of earth which tell of their previous existence.... an existence which is still shrouded in mystery.

As the early explorers began to come into the Mississippi Valley, they began to find strange mounds of earth which were man-made and in distinct shapes and designs. The settlers began to look upon these mounds as evidence of a long-vanished and forgotten culture and as they dug into the mounds, they found a wealth of extraordinary artifacts. These remaining antiquities included pottery; beautifully carved stone pipes; intricate stone carvings; and effigies of birds and serpents made from copper and mica. The mounds also contained vast number of human bones and it became obvious that most of them had been designed as burial mounds.

Soon, the mystery as to who the Mound Builders had been gripped the public imagination. A number of intriguing theories sprang up, suggesting that the builders of the mounds had been may have been Vikings; Phoenicians from the ancient city of Tyre; Welsh explorers and even the lost tribes of Israel. In other words, anything but Native Americans!

In 1839, a solution to the mystery was suggested by an eminent ethnologist named Samuel G. Morton, who produced evidence that the skulls taken from the mounds were identical in shape to the skulls of Indians who had recently died. The Mound Builders, he stated, were the early ancestors of the present-day Indians. Few people accepted this conclusion until around 1881, when the Smithsonian Institution mounted a special investigation that was led by an Illinois naturalist and archaeologist named Cyrus Thomas, who was himself a supporter of the "lost" race theory. Thomas and his team unearthed and examined thousands of artifacts over a seven-year period and he was eventually forced to change his mind. The Mound Builders truly had been early Native Americans.

One of the largest of the Mound Builder sites is located in southwestern Illinois. Near Collinsville is the Cahokia site, which is sometimes called "Monk's Mound" after Trappist monks who farmed the terraces in the early 1800's. It is a stepped pyramid which covers about 16 acres and one which was apparently rebuilt several times in the distant past. At the summit of the mound, are the buried remains of some sort of temple, further adding to the mystery of the site.

During the Middle Ages, Cahokia was a larger city than London and yet today, is an abandoned place about which we know almost nothing. Centuries ago, there were more than 120 mounds at the Cahokia site, though the locations of only 106 have been recorded. Many of them have been destroyed or altered because of modern farming and construction, although 68 have been preserved inside of the state historic area boundaries.

It is generally believed that about 20,000 people once occupied Cahokia, living inside of a wooden stockade which surrounded various pyramids. The site is named after a tribe of Illiniwek Indians, the Cahokia, who lived in the area when the French arrived in the late 1600's. What the actual name of the city may have been in ancient times is unknown. The site is believed to have existed from 700 A.D. until its decline in 1300. By 1500, it is thought to have been completely abandoned.

So, what happened to the Mound Builders of Cahokia? Some archaeologists believe the last survivors of the Mound Builders were the Natchez Indians of the Lower Mississippi Valley. These Indians were known for being devout worshippers of the sun, which may explain the uses of the mounds at Cahokia and the so-called "Woodhenge" of the site. These 48 wooden posts make up a 410-foot diameter circle and by lining up the central observation posts with specific perimeter posts at sunrise, the exact date of all four equinoxes can be determined.

It has been suggested that perhaps the Mound Builders abandoned the area because of overcrowding or contamination of the local water supply, while others have theorized that it may have been a breakdown of the civilization itself. The sun-worshipping Natchez Indians were already in severe decline by the time the first Colonial explorers reached the Mississippi. Soon afterward, they were completely wiped out by the French during a series of Indian wars along the river.

Could the degeneration of the Mound Builder's society have brought the civilization to ruin? Perhaps, although many people still consider the Cahokia site to be a sacred place. In August 1987, the Monk's Mound was the meeting place of more than 1000 people who took part in a worldwide "harmonic convergence" which was designed to bring peace to the planet. Many Native Americans and metaphysical groups believe Cahokia is a source of powerful psychic energy even today.

CAHOKIA MOUNDS is located just outside of Collinsville, Illinois, a short distance off Interstates 55/70 and 255, along Route 40. The highway runs through the center of the area (much of which has been lost over the years) separating Monk's Mound from the nicely-designed visitor's center.