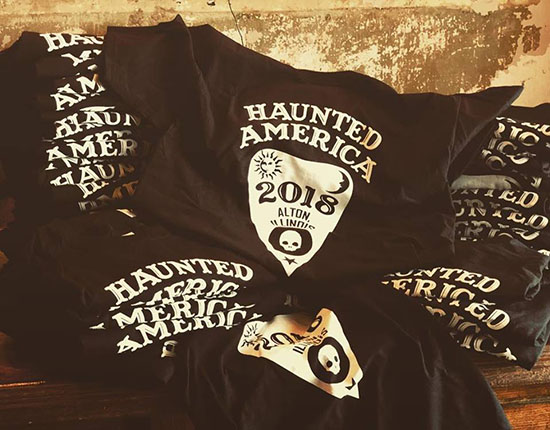 Every year the Haunted America Conference features a new t-shirt. This year's shirt was a huge hit! (Photo by Troy Taylor)

Summer is known for backyard BBQs, swimming pools, and outdoor fun but for some it is also known as the time for the Haunted America Conference. Those interested in the paranormal, unexplained occurrences, and unconventional history, gathered last weekend at the Haunted America conference in Alton, Illinois, known as one of America's most haunted towns. This year marks the 22nd year for the conference which was created by American Hauntings owner and author Troy Taylor and organized by manager Lisa Taylor-Horton.

This year marked the highest in registration for the event with over 350 people estimated to have attended. In the effort of full disclosure, I work for American Hauntings and conduct the Haunted Carlinville Tour and paranormal investigations for the company. I also work the American Hauntings conference booth and was blown away by the outpouring of excitement expressed by guests as they walked in the door. 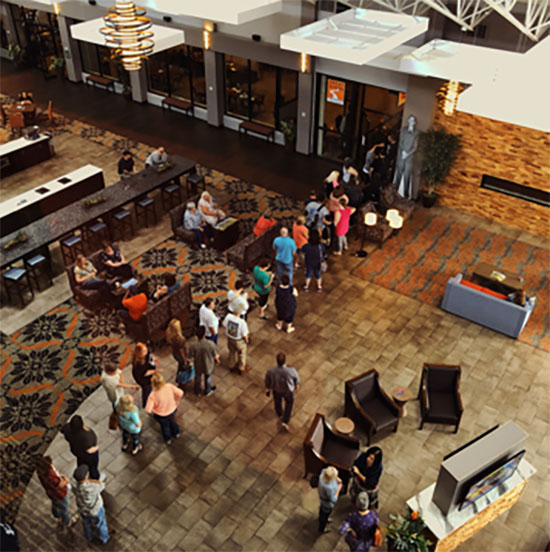 The line for the 2018 Haunted America Conference wrapped around the hotel lobby as guests waited to enter the vendor room (Photo by Troy Taylor)
Having worked at the Haunted America conference for several years now, I've become accustomed to being asked by outsiders, "What is the conference all about? What do you do while you're there?" The experience differs for everyone but I will try to give a taste of what one might expect.

This year a couple named Judas and Magnolia offered theatrical Victorian seances. Guests were able to witness and participate in an authentic s'eance as one would expect to experience in the late 1800s. The couple used their skills as illusionists to re-create table tipping, glass moving, as well as other aspects reported in a Victorian s'eance.

The speakers and presenters offered a variety of subjects that no matter what your specific strange interest there was something for you.

Rosemary Ellen Guiley brought back her popular black mirror scrying workshop designed to teach you how you can gaze into the black mirror to connect with the other side. She also offered a dumb supper, a supper intended to invite the dead, and also gave a presentation on a variety of entities and creatures in the supernatural realm.

Artist and author April Slaughter held a workshop in conjunction with the release of her new book with Troy Taylor called Disconnected from Death: an in-depth look at the history of caring for and memorializing the dead. If there was anything you wanted to know about funeral customs and death rituals, this class had it.

Paranormal investigator and author, Sherri Brake, taught us about Stones and Bones as she spoke about headstones, gravestone symbolism and haunted cemeteries. Later that night she offered a pendulum and dowsing workshop. I can personally attest that dowsing can work for all sorts of things including detecting energy abnormalities and even finding your water line!

Returning podcasts included "Ghostly Talk Radio," the original online radio ghost show, with hosts Scott, Bonnie, and Amber featured on the conference speaker's panel. The "American Hauntings Podcast" also returned with a live recording of "Strange Stuff" featuring American Hauntings' own Len Adams and Luke Naliborski. Podcaster and host, Cody Beck, recorded guests throughout the conference as they told their own ghost stories and unexplained experiences. These stories are now featured on the "American Hauntings Podcast" which can be found on iTunes or any other podcast app.

Sarah Soderland, also known as Paranormal Sarah, a multi-talented and experienced paranormal researcher, hosted a ghost photography workshop in the historic and haunted Mineral Springs Hotel. The workshop included a live photo session which allowed guests to capture a paranormal phenomenon on camera, including ectoplasm, possession, and apparitions in a professional photo.

Newcomers to the conference included paranormal investigator, Jennifer Jones, who gave a presentation titled "Exploring Dead History -- Exploring the role of historical fact in paranormal investigation, urban legends, and "lost" history." She gave valuable tips and lessons on how to uncover hauntings and history.

Sarah Chavez, director of Order of the Good Death, offered a presentation called "Feeding the Dead - Food in Death Rituals, Ancestor Worship, and Festivals." What does food have to do with death? Sarah explained how people have used food to honor the dead and even communicate with them.

Author Colin Dickey captivated the audience with "A Most Peculiar Graverobber: A Tale of Resurrection Men, Night Doctors, a Cavern of Bones, and a Haunted Medical School." Colin was also a vendor and sold out of his book Ghostland: An American History in Haunted Places faster than he could set them out on the table.


And then we had the conference creator himself, Troy Taylor. Troy, who I like to point out has been running this conference since I was in 1st grade, presented "Song of Dance and Death -- A dark look at music and the supernatural, from cursed songs to deals with the devil, "hoodoo" tracks, murder, misfortune, and more" Do you think you know what the "27 Club" was all about? Troy explained it all, and trust me, there is a WHOLE lot of strange when it comes to the music industry. 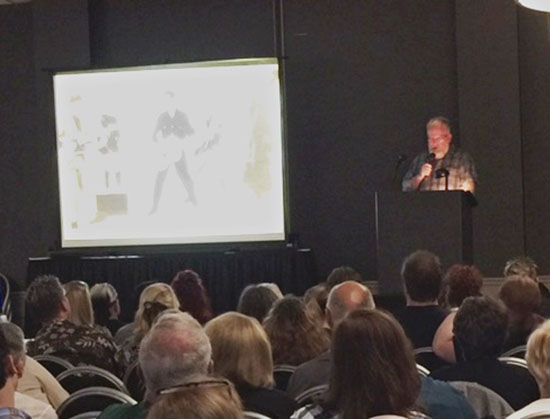 Speakers, including Troy Taylor, packed the conference room as they educated and entertained over 300 guests!
Speaking of music, Sunspot, hosts of the "See You on the Other Side" podcast, and accomplished musicians entertained the guests this year with a variety of live music. They even became the conference's own version of the traveling minstrels as they traveled throughout the conference area playing music. 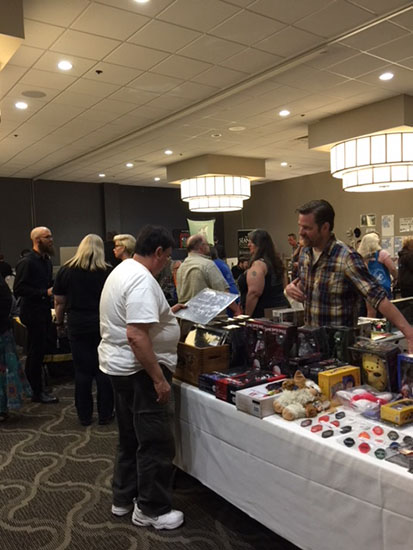 The vendor room was busy right up to the last minute of the conference closing.
In between speakers and events, the vendor room was packed and housed the most vendors at the conference in all 22 years of operation. Whether you are into books, pop culture, travel, jewelry, or anything in between, you would find something of interest. Raffle items were also available and tickets were going quickly for a chance to win one of the prizes which included a Ouija board table, antique ventriloquist dummy, s'eance candle sticks, and voodoo set.

Attendees kept their fingers crossed to win one of the many items featured in this year's raffle!

What about the ghosts?

To paraphrase one of my all time favorite characters, Ian Malcolm from Jurassic Park, "Now eventually you have might have ghosts in your ghost conference, right?" Well yes...yes, we do. Several after-hours events were offered this year and included ghost hunts at the McPike Mansion, Unitarian Church, Mineral Springs Hotel and a Haunted History Walking Tour of Alton.

I spoke to some of those who participated in the paranormal investigations and it was an active weekend.

Len Adams, one of the most entertaining people I've ever had the pleasure of knowing, not to mention a seasoned investigator, is a McPike Mansion pro. He's been there countless times. Unfortunately, the house isn't accessible due to safety hazards but the cellar is, and that seems to be active enough. During the McPike investigation Len reported seeing a shadow person appear, a shape that doesn't show defined features but is outlined and appears as human. He also lost all charge of his cellphone down in the cellar. Needless to say, the mansion did not disappoint.

The Mineral Springs Hotel, another hotspot for paranormal activity, left several guests with their own stories to tell. In the upstairs portion of the Mineral Springs a woman was found waiting in a hallway. The guide, Luke Naliborski, a veteran Haunted Alton guide and owner of I Had that in Belleville, IL, said the woman stated she was waiting for those in the hallway to exit. She was certain the hall was occupied but when Luke checked the hallway it was empty. Any noise or presence that was there was not made by anyone living.

The next night another woman approached a group of us near the staircase that leads to the area with the hallway I just mentioned. She became a bit upset and accused us of laughing loudly and creating an obnoxious amount of noise. We all looked at each other with a perplexed expression as we had been talking very quietly, almost to a whisper with none of us being loud. The laughing and the noise had not come from us and we were the only living people around.

A few were also victims of perhaps one of the most annoying manifestations of the paranormal, battery drainage. Several reported their cameras, phones, and equipment having the battery life sucked out of it as they tried to investigate the building.

The group that I led on Saturday night included a vast number of guests experiencing EMF abnormalities and responses. Virtually every location of the building had at least one person reporting unexplained EMF. Several people stated they believed they were able to get "yes" and "no" responses to questions using the EMF meter as an indicator, specifically in the ballroom area, the upstairs area that is being remodeled, and in "Pearl's Room" an area where a woman named Pearl Sons committed suicide in 1965. Others used EMF meters as a way to signal non-living movement across thresholds and doors.

The infamous "slaughterhouse" which is really the sub-basement and area where the Mineral Springs Hotel bottled their mineral water, also made an impression. One group was down in the basement and a young woman decided to skip a rock to someone in an effort to startled them. Almost immediately after her failed attempt to spook her group, she felt a small rock hit her head. The rest of the group heard the small rock hit the floor and turned on their lights. Nobody in the group had dropped the rock on the woman's head and it appeared as though no rocks were loose directly above her. Was it a spirit trying to play a trick on her? Whatever it was, it got her attention.

The full list of experiences on the after-hours tours are too long for me to list and I'm certain there are even more I'm not aware of.

The Haunted America Conference will return next June to Alton, Illinois! Every year new guest speakers, workshops, and events are added so you never hear the same thing twice which is why so many of the attendees return year after year. Where else can you casually mention ghosts, demons, and death? Not many places, but here you can. I promise we won't give you a funny look!

One of the things I love the most is being able to mingle with people who share my interests and can share their own personal stories of the paranormal and unexplained. You won't find a nicer group of people with more interesting haunted tales.


But next year is SO far away!

Good news! You don't have to wait until next June to experience the strange and unusual that American Hauntings has to offer. You can join us on our haunted history walking tours in Alton, Carlinville, Chicago, Decatur, and Jacksonville available this fall with Alton tours offered now. Don't want to walk? We have bus tours available in Alton and Decatur. Want us to feed you dinner? We have that covered too with our Dinner and Spirits Tour and Ghost of the River Road Tour in Alton. Also, if you're interested in investigating some of the buildings mentioned in this article or other haunted places in the area, you can join us on our ghost hunts which are available throughout the year in Illinois and around the Midwest.

If you're interested in experiencing real haunted history and authentic paranormal investigations I invite you to sign up for one of our events. No matter what your level of interest or specific paranormal passion, I'm sure we have something you will enjoy.

Visit: www.americanhauntingsink.com for everything American Hauntings including books, podcast, tours, ghost hunts, and other events.