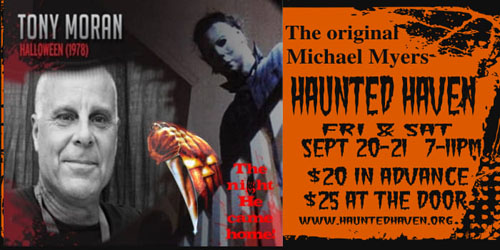 To celebrate their 10 year anniversary, Haunted Haven Haunted House featured a horror celebrity, Tony Moran, at their Rock Falls attraction on September 20th and 21st, 2019. Over the years, Moran has played in several horror movies. He is most famous, though, for his portrayal as Michael Myers in the well-known 1978 horror classic "HALLOWEEN", starring aside Jaime Lee Curtis.

During his appearance at Haunted Haven, Mr. Moran was available for autograph signings, as well a meet-and-greet. Upon hearing the news, fans flocked from several states just to see him. They traveled from as far as Texas and Louisiana! Haunted Haven owners reported that he was very accommodating with fans and spent a considerable amount of time with each one. With well over 1,000 fans coming to see him, the lines were crazy, as could be expected with a celebrity event like this. Kudos to the haunt staff for managing such a large group of patrons so well.

Special thanks go out to Haunted Haven for allowing Haunted Illinois unlimited photography access to the event. In order to not be disruptive, we kept the pictures of Mr. Moran to a minimum. We hope you enjoy the photos below.

To read our official 2019 review of the Haunted Haven Haunted House, click here.