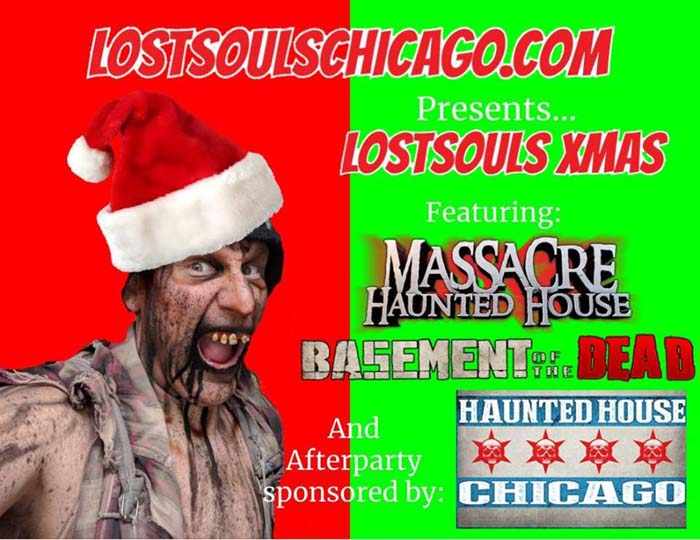 The Lost Souls Haunted Bus Tour was out this past Christmas season. It was a great time had by all. What bus tour, you ask? Why, the Lost Souls Haunted Bus Tour, of course! I suppose I need to explain a few things if you have never heard of such an event. The Lost Souls Bus Tour was an idea that was spawned originally by Terry Mannix in 2016. His vision was to take people around to see haunted house attractions by bus. He would make advanced reservations with a few local haunted houses, then charge riders for their ticket(s) all at once. The entire group would arrive at the attraction and all riders would be ushered in, making it convenient for everyone. Terry needed something to keep the momentum going while traveling, so enter Japes Palles, who was hired on as on-board talent. The two had partnered in 2017.

Japes' character Brewster Bonesaw is the host and Brewster loves haunted houses. He is a seasoned actor/ manager in the Chicago haunt community. Japes ....well Brewster had acted and has been a manager at local haunts such as 11th Hour, Asylum Experiment, Rob Zombie's Great American Nightmare, and Dream Reapers. His skills did not keep him in Illinois. He's also worked in Nevada, Arizona, Louisiana and Wisconsin. Brewster loves to talk and that's what he does. He is the emcee and will not let boredom be a factor. Not on his watch. Let's not forget about Terry who now fills in all other jobs on the Lost Souls Bus Tour. Terry has done acting and makeup at the Brookfield Jaycees, Asylum Xperiment, Massacre, Rob Zombie's Great American Nightmare, and SickHouse.

The Lost Souls Bus Tour has been operating the past few years during the month of October and they operate a few weekends during the season. The bus departs from a single location. All of their haunt-loving guests are chauffeured around from three to four specific attractions listed on that evenings' itinerary. Each time they head out, they visit a set of new haunts so planning your trip is super simple. Going on this tour during the month of October can allow a person to hit the majority of pro haunts in the collar counties of the Chicagoland area, and the best thing is you don't have to drive or worry about directions. You don't have to make sure you have enough money, since your ticket purchase was paid for in advance. The best part! It's all VIP access. It's a party on wheels, Brewster always has a story. He will often talk about the history or factoid of the haunt we are approaching.

So let's talk about the Xmas Bus Tour that I attended this past Christmas season. The pickup point was rather interesting; it was a sort of "red headed stepchild" of social spaces called Outta Space. We were smack dab in the middle of the downtown Berwyn nightlife. This location is an event / crafting / art space, a venue with a bar which highly supports craft beer. It is a one of a kind place and is filled with creativity. In the past, during their October tours last year, they had used Reggies in Chicago and Evil Intentions in Elgin, with Reggie's Rockin' Bus as the mode of transportation. This time around we had your normal run of the mill school bus. Now this is fine, and no offense to Reggies Rockin' Bus, but the seating was a bit uncomfortable. Every other seat faced each other which helps you make new friends... which is great, but interlacing your knees between your new found friends makes it a bit more intimate. With the bus ride it's a BYOB policy, but don't overindulge, since there are no bathroom breaks while on the road and limited facilities at the haunts. Plus, you don't want to be the one holding up the group. Brewster is there to make it fun. There are raffles of items donated from various haunts and local Halloween vendors, social Jell-O shot salutes, and a 50/50 at the end of the night, with the other half of monies raised to tip our driver.

We had the opportunity to visit two southside haunts, Massacre (Christmas Nightmare) in Montgomery and Basement of the Dead (A Very Scary Axe-Mas) in Aurora. Both haunts were decked out! Each haunt had transformed all of their scenes, actors and their queue line in full Christmas themed attire. Both had their photo ops with Santa. Massacre has been noted as the longest running Christmas show to date, and Basement did take the extra step and invited special guest Kyle Vest from the show Skin Wars as Jack Frost. Massacre and Basement had done an equally fantastic job and taken this winter celebration adding their special touches. We returned back to Outta Space and were greeted to their evening's scheduled entertainment, a few local bands with a comedian to fill in the set changes. Pictures with "Santa Bonesaw" and food were provided by Haunted House Chicago.

Holiday haunt events like this allow many actors from surrounding haunts that are not operating in the "off season' to hone their skills and keep the haunt bug alive. Guest acting at other locations is not only limited to the actors themselves. Makeup artists and behind the scenes personnel can also stay in "haunt mode" when the availability is presented.

Speaking of other haunts and acting, many Christmas themed shows can be found every December in the Illinois area. Midnight Terror in Oak Lawn, in Forest City Fright Night, Factory of Fear in Moline, 13th Floor in Melrose Park and Baldwin Asylum in Rantoul. We are hoping to see more of this trend expanding in the coming years.

October planning for more tours will begin this summer. Some may be geolocated like the Southside tour or themed like the Haunted Illinois top three for 2017. Japes still wants to bring back some of the added bonuses at the end of the evening that you would not normally get if you went to visit on your own. In the past, there were offerings like a lights-on backstage tour, guided FoH haunt tour, or an after party with food and drinks provided, all of which was part of your original ticket price.

Look for Brewster at your local haunt and convention in 2019 make sure you ask about the Lost Souls Haunted House Bus Tour. This summer, plans will be created to bring more haunts and an expanded zone outside of the limiting borders of Illinois. I can't wait to see what unfolds this October. I know I'm buying my ticket early. Unfortunately, the Lost Souls Haunted Bus Tour will not be making any Valentine's Day runs. But many of the haunts noted above will be offering shows, check out the Haunted Illinois list of off-season attractions to find out their schedule and locations.