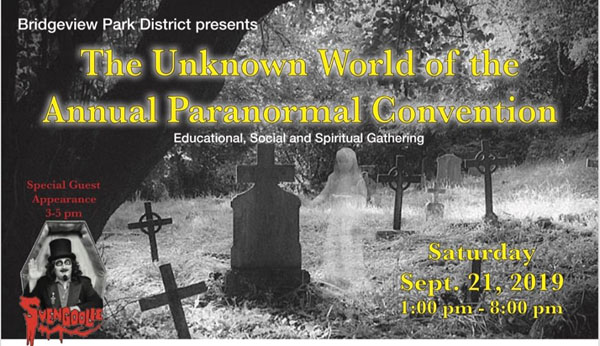 HauntedIllinois.com's Review of "Unknown World of the Paranormal Convention"

Presented by the Bridgeview Park District

On Saturday September 21, 2019, the Bridgeview Park District hosted the Unknown World of the Paranormal Convention, located in the Commissioner's Park building from 1-8pm. The entire hall and the parking lot outside was utilized for the event, with decorations literally everywhere from the blacked out stairwells to inflatables and hanging ghosts in the gymnasium/convention space. Outside, a handful of classic and souped up hearse models with license plates like 'LSTRIDE' and 'CORONER' were parked for the public's enjoyment. Food and drinks were available, sold by local eateries and cafes, including tacos, pizza, and artisan coffee.

The first hour of the event was dedicated to the vendors in attendance (though they remained open and available the entire time). The gymnasium was full of artisans of every type (from horror curios and pagan religious supplies to unique jewelry, edible treats, and clothing), plus a number of tables hosting local horror/paranormal themed podcasts, authors, Haunt and Paranormal tour companies. We visited every booth; everyone was passionate about their craft, knowledgeable, and extremely friendly. One definitely achieved a sense of community; we weirdos are good company. Check the thumbnails for flyers and business cards we collected. Palm readers and psychic mediums provided readings for those interested in private, quieter rooms throughout the building-- a list of those in attendance is included at the bottom of this review.

Starting at the second hour and on through the end of the convention, the the guest speakers took the center stage in the gymnasium (introduced by Indiana's own Count Gregula, who was also incredibly funny and friendly), and workshops took place in the large dance room on the second floor. Speakers presented their topics and answered questions from the audience with hour-long presentations, all of which included audio and visual displays. We attended the first workshop-- Special Effects and Horror Make-up-- hosted by John, owner of Dead Rising Haunted House in Crestwood. John demonstrated easy, cheap techniques for creating creepy, gory, and realistic looks for his Monsters on one of his own house actors, answered questions, and was kind enough to give members of his audience various 'wounds' to sport the rest of the day (yours truly scored a gnarly bruise). Check the bottom of the review and the thumbnails for a list of guest speakers and workshops presented.

From 3 to 6pm, the host with the most Svengoolie was available to the public for photos and autographs. The event did suggest those interested arrive early, though the line never seemed to be more than an hour wait (we waited exactly one hour and three minutes), and it was located on the running track that circled above the convention hall, so those of us in line could still enjoy the guest speaker currently on stage (we listened to Neal Gibbons: Paranormal Evidence Collected by the Anahata Box-- see the thumbnails for pictures of this interesting device). Sven personalized every single autograph, and his assistant helped folks by taking photos with their cameras or phones. The assistant was also selling official Svengoolie t-shirts ($20) posters ($15) and rubber chickens ($10)-- cash only-- and both were extremely welcoming and friendly. See the thumbnails for my own picture with the Legend!

After visiting with Sven, we were finally able to attend one of the guest talks: Dale Kaczmerak's Creepiest Evidence of All Time. Dale presented video and audio evidence from paranormal investigations he and his team had taken over the years, many of which gave me literal chills (and I'm a skeptic!) Forgive me, I was so enthralled with his presentation that I completely forgot to take a picture- however, he is in the thumbnails sitting at his booth of paranormal books from earlier in the day.

The convention wrapped with a paranormal investigation of the building itself (including a seance), however we were unable to stay for that treat. An interesting and unexpected experience for the day, however, came from dealing with a small group of religious protesters who gathered at the front walk, pressing convention-goers and passer-bys with questions and You Need Jesus pamphlets before they were shoo'ed away by Bridgeview Police for not having a permit. They moved to the entrance of the parking lot (public property) until it began to rain, and the decided to leave.