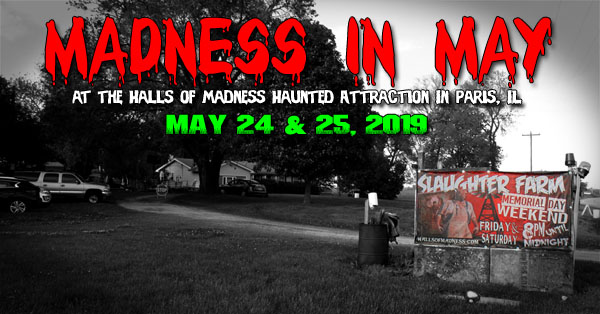 HauntedIllinois.com's Review of "Madness in May"

Every year, the Halls of Madness haunted attraction in Paris, Illinois opens their doors during the Memorial Day weekend, to entertain local fans with an event called “Madness in May”. I have always enjoyed visiting the Halls of Madness, but all of my previous visits were during the Halloween season in October. This was my chance to see what kind of show they put on in the off-season.

After a long four-hour drive, I arrived at the attraction where I was greeted by Troy Stone, owner and operator of the Halls of Madness. After having a long chat about the Haunted Attraction Industry, he gave me an informative behind the scenes tour of the grounds. As it got closer to show time, I was allowed access to their makeup room where actors & actresses were bustling about, selecting costumes and applying makeup, to transform themselves into all sorts of backwoods creatures. In addition to the Halls of Madness’ regular cast of characters, a small group of actors from a neighboring haunted house “Night Terrors of Effingham” came to guest act.

It turns out that the show they put on in May is very similar to what haunt fans see during October. Their main attraction is called “Slaughter Farm” and it has a backwoods theme. The dark wooded area the attraction was held in provided a nice creepy backdrop for the event. Throughout the attraction, various fences, barriers and dilapidated shacks were constructed from old pallets and scrap wood. Eerie sound effects and creepy mood lighting provided additional ambiance. Walking down the dark, twisting path was enough to send chills down my spine. The show definitely had a “Deliverance” sort of feel to it.

In addition to walking through the attraction as a normal customer, I was also given permission to take photos of actors along the way. As can be seen by looking at the picture gallery below, I got some great shots.

It was a fun evening and well worth the long drive. Special thanks to Troy Stone, for being such a gracious and accommodating host. I would also like to thank all of the actors and actresses for allowing me to disrupt their normal routine by taking pictures and video.

If you are looking for something fun to do with friends and family, be sure to check out the Halls of Madness and Night Terrors of Effingham.

The Halls of Madness