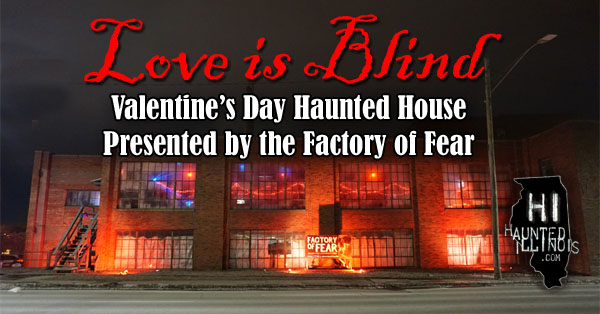 HauntedIllinois.com's Review of "Love Is Blind"

When Factory of Fear in Moline, Illinois announced that they were opening their doors during the weekend before Valentine's Day of 2019, it didn't take a lot of convincing for us to decide to see what they were up to. We enjoy their show during October, and we have enjoyed other off-season events that they've hosted in previous years. We packed up the car and traveled about two hours for a weekend in the Quad Cities.

We joined the Factory of Fear crew for a behind the scenes look at costuming and makeup a couple of hours before they were scheduled to open on Saturday. When their stage manager and make up artist, Lexie Wilson, asked me if I wanted to stay and act in the attraction, I gladly accepted her invitation.

We visited as about twenty actors were getting make up done and getting costumes on. There were a few talented artists that stepped in and helped other actors put their faces on for the evening festivities. Once everyone was ready, we all filtered out to the cue line area and took a group picture before we found our spaces to haunt and waited for spectators to shuffle in.

And shuffling in is exactly what they did. The visitors that were brave enough to face the cold weather outside and the monsters inside of the haunted house were given one red glow stick per group, and that was (for the most part), their only light source through the extremely dark rooms and hallways. From where I was, I heard a lot of screams from scared patrons, laughter from guests having a good time, and a lot of improvisation from some very talented actors that were nearby. One of the things I enjoy about Factory of Fear is their "off the wall" interactive acting style, so I really enjoyed seeing it from their point of view for an evening.

Our renowned webmaster at HauntedIllinois.com, Adam Drendel, was lucky enough to walk through the haunted attraction before and while it was operational for guests. While he was shuffling through the darkness, he encountered several characters; such as a dead Cupid, a demon yielding the bow and arrow that killed said Cupid, a crazy cat lady, a clown, a mad scientist, and several maniacs within the medical ward which I was stationed near.

We enjoyed our time at Factory of Fear this February. Their "Love is Blind" event is very cleverly named, considering no one in the building can see where they are going with a single glow stick. However, it sounded like everyone that visited was having a very good time. We recommend following Factory of Fear to get updates on their off-season events, which they host pretty often. We've always had a great time visiting, and I think it's fair to say that it's worth a trip to the Quad Cities to see their show.