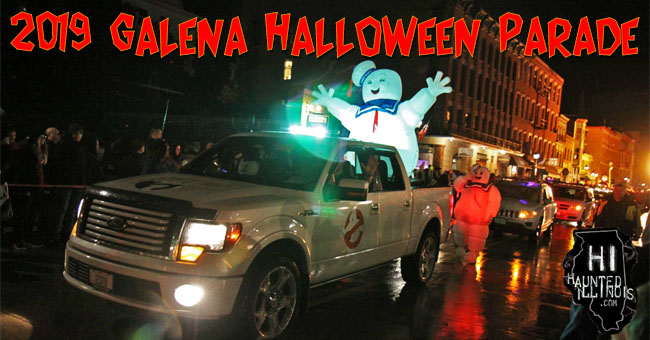 In late October, the staff of Haunted Illinois visited Galena, Illinois, to see their 41st Annual Halloween Parade. Before the festivities, we walked around town to check out all that Galena had to offer. The picturesque surroundings made it easy to see why Galena is such a popular vacation destination. Walking up and down the main thoroughfare, we found that there were many local shops to explore, each offering its own unique products and services. Stores were filled with hand-made crafts, novelties, baked goods, exotic cheeses, wines and more. While we had traveled to Galena just to see the Halloween parade, I'm glad that we had the extra time to explore the downtown area.

About mid-afternoon, we could see that the city was preparing for the parade. Around 3pm, city employees started shutting down the main street, clearing out all of the parking spaces along the parade route. As the parade kickoff got closer, the downtown area began to fill with Halloween enthusiasts like ourselves. Before long, both sides of the main street were packed with thousands of people eager to see the parade. Luckily, we had thought about that ahead of time and earlier in the day we had set up folding chairs along the curb, to claim a prime viewing space.

With rain clouds looming, we feared that Mother nature wasn't going to cooperate. Most attendees came prepared, though, with umbrellas in hand and appropriate attire to "weather the storm". Throughout most of the parade, the rain was moderate, so we lucked out.

The parade was similar to others in some respects, but with a Halloween flavor all its own. Along with the typical fire engines, city vehicles and marching bands, there were many decorated floats, accompanied by costumed characters handing out candy. While watching the parade, some notable themes stood out, including the Wizard of Oz, Nightmare Before Christmas, Dia De Los Muertos, Toy Story, graveyards, haunted houses, zombies and more. Many local businesses and groups participated with their company vehicles, which were decorated with spooky adornments. There were also several hot air balloon baskets that shot flames 30 feet into the air, which is a tradition at the Galena Halloween Parade!

Despite the rain, we were still able to capture the following pictures for you to enjoy. If you get the chance, be sure to check out the Galena Halloween Parade. It is a fun time and definitely worth the trip. Just fair warning... reserve your accommodations early. The hotels in the area fill up fast!

For more information about Galena and their Halloween parades in the future, go to: https://www.visitgalena.org/